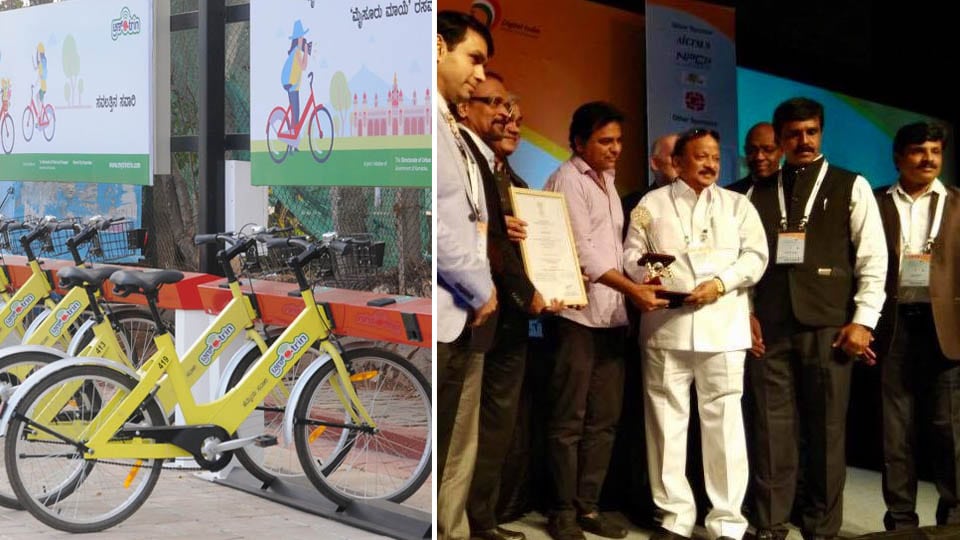 Mysuru: The Heritage City had lost the ‘Cleanest City,’ tag in the country last year. However, with its unique initiative of introducing the Public Bicycle Sharing System, ‘Trin Trin,’ the first of its kind in the country, has bagged a Special Award under the category of Non-Motorised Transport (NMT) Project instituted by Ministry of Housing and Urban Affairs.

According to the citation, “This project has been selected for award based on the initiative for a tourist city to popularise NMT in the form of bicycles. It is a solely government-provided infrastructure with modern bicycle stations, smart card-equipped usage and lower rental fares making the system more attractive to students and daily commuters.”

Mayor Ravikumar was ecstatic about the award and said that the Corporators and the officials of the Corporation would be motivated to provide a better system.

MCC Commissioner G. Jagadeesha said that Trin Trin as a concept was catching up in the entire country and this special award was very inspiring to extend the facility to other parts of the city and introduce more docking stations.

Directorate of Urban Land Transport (DULT) Special Officer N. Muralikrishna speaking to Star of Mysore over phone from Bengaluru, this morning said, “I am very happy that Mysuru has won the special award. Now, apart from introducing the facility in Bengaluru, which the Chief Minister himself is interested in, we will follow it up by setting up public bicycle sharing in other cities like Hubballi, Dharwad and Shivamogga.”

“In Mysuru the facility will be expanded by adding 10 more docking stations,” he said.

No docking stations in Bengaluru

There will be no docking stations in Bengaluru unlike in Mysuru as there is paucity of footpaths.

“It will be a docking less system. It will be much more sophisticated using smart technologies. QR code will be used to track the cycles and smart lock technology will be adapted by using mobile phones to lock handlebars,” said Muralikrishna.

Muralikrishna said that in Bengaluru they are planning to introduce 6,000 bicycles in another 8 months.