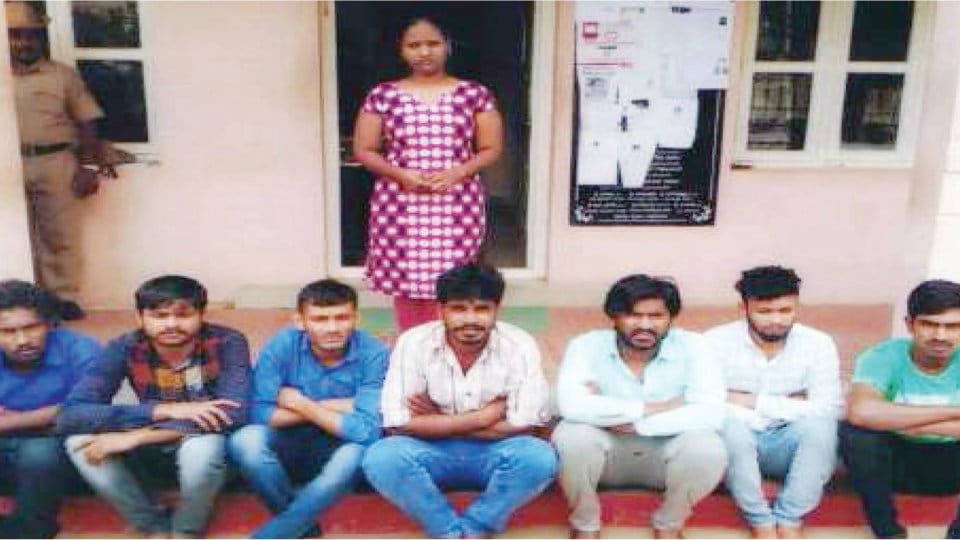 Bengaluru/Mysuru: A 19-year-old girl from Mysuru has been  arrested in Bengaluru yesterday along with seven of her gang members for luring a proprietor of a private firm into a honeytrap and later robbing him. The gang targeted wealthy businessmen and film actors and the arrest was made by the Bagalakunte Police.

The girl has been identified as Divya, daughter of one Ajay, a resident of N.R. Mohalla in Mysuru. The other accused (all from Bengaluru) are Tilak alias Rebel, 24, from Kamakshipalya, Lokesh, 27, from Machohalli in Kadabagere Cross, Manjunath, 21, from Chikkasandra, Kiran Kumar, 24, and Puneeth, 22, both residents of Harohalli, and Madan, 22, and Sumanth Kumar, 22, from Andrahalli.

Police said that the gang operated from Bengaluru and the victims were trapped with Divya’s help. She used to call potential targets and lure them to secluded places. When the unsuspecting victim arrived at the spot, other gang members used to rob him by threatening him, the Police said.

The Police have suspected that the gang might have been involved in more cases.

The latest victim of the gang has been identified as Bharath, a 30-year-old resident of Nandini Layout. He owns an advertising company in Bengaluru and has also acted in a Kannada movie. He was honey-trapped on June 6, said a press release from the office of DCP (North). Bharath was robbed near Bagalakunte signal when he was sitting inside his car. Bharath had come to the place as instructed by Divya.

In his complaint, Bharath has stated that Divya had managed to obtain his mobile number and had sent him many text messages asking him to meet her. He said that he did not suspect her intentions as the messages were cordial.

The gang had robbed Bharath of his two iPhones, four ATM cards and Rs. 15,000 in cash. After robbing him, the gang members asked him to arrange for Rs. 1 lakh in cash and to leave the place. Using this opportunity, Bharath escaped and later lodged a complaint.