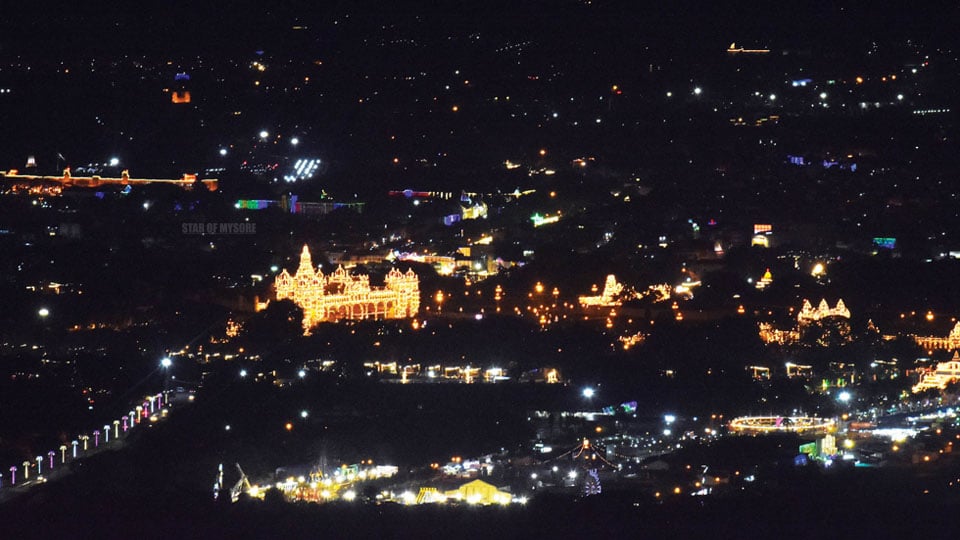 City Night Viewing from Chamundi Hill only till 10 pm

Mysuru: Ninety-kilometres of Mysuru is illuminated for Dasara and there is no better place than the Chamundi Hill to view the vast expanse of the city sparkling like diamonds on the ground. It is truly a sight to behold and tourists, along with the residents, are queuing up the Hill to have a view to please their senses.

So much is the rush that people are sitting at the two View Points and other vantage points atop the Hill as early as 4.30 pm to view the breath-taking and colourful hues. However, many tourists are disappointed as according to them the City Police is playing a spoilsport by not allowing them to have a proper view.

Star of Mysore  got a couple of calls this morning from tourists who alleged that they were driven off the Hill midway and the Police did not allow them to watch the illumination, despite several requests. “We have come from Kurnool in Andhra Pradesh to see the illuminated city as a lot of it has been written in newspapers and websites. However, we were not allowed to see the views,” complained Satish Reddy who had come along with his 7-member family in two vehicles.

Tourists said that the crowd at the View Point is beyond manageable limits and people do not move after seeing the city. “People just stay there for hours denying the chance for others. Moreover, the Police are a killjoy and we were warned not to stay in the Hill,” complained Sudha Chandrashekhar, who had driven her car from Whitefield in Bengaluru.

All the View Points and the boundary walls, Gaali Mantapa are full of people till night. First they seek the blessings of Goddess Chamundeshwari and squat on the parapet walls to see the illumination that is between 6 pm and 10 pm. The lights are switched off at 10 pm. Only on Oct. 7 and 8, the lightings will be up till 11 pm.

Reacting on the public criticism, Krishnaraja Police Inspector L. Srinivas told SOM that the Police are only taking precautionary measures. “From 6 am to 10 pm there are no restrictions and we are not imposing any rule. We have the responsibility of giving everyone a chance to view the lightings and that is why we are controlling the crowd,” he said. The Krishnaraja Police is responsible for Chamundi Hill security.

“A lot of people come to the Hill after dark and they put loud music in their cars and dance, creating a nuisance. Also, it is unsafe to squat on the parapet walls as accidents might happen. Incidents like drunken behaviour, eve teasing and other unruly behaviours have forced us to ban people after 10 pm. If we allow people beyond 10 pm, there will be law and order problem,” he said.

As a precautionary measure, the Police have deployed 2 KSRP vans with two platoons with 20 soldiers each and two Garuda vehicles are stationed atop the Hill that constantly monitors and conduct recce. “We are here to maintain law and order and we are sticklers for rules and we do not allow entry to Chamundi Hill after 10 pm (except for Chamundi Hill villagers who have been given ID cards) and all those who stay beyond 10 pm are being vacated. We want to put curbs on illegal and immoral activities,” Srinivas added.

City Police Commissioner K.T. Balakrishna said that the Chamundi Temple closes at 9 pm and the illumination is off at 10 pm. “Some people come here just to create nuisance and we are enforcing rules only after 10 pm to ensure law and order. We have taken this step for the safety of tourists and they must co-operate,” he added.

Chamundi Hill Mysore Dasara 2019
It’s a cake walk for Arjuna to carry Golden Howdah
Like us, Flowers too Speak