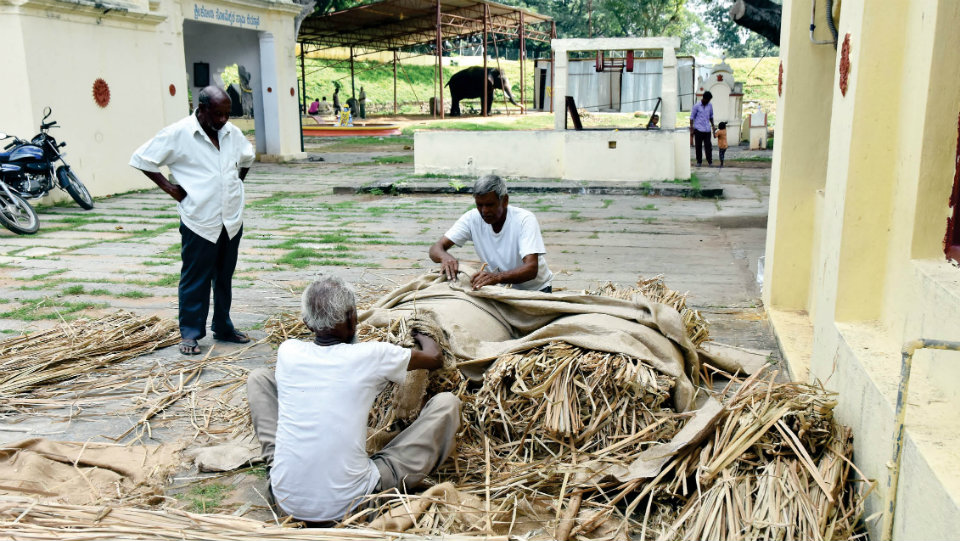 It’s a cake walk for Arjuna to carry Golden Howdah

Mysuru:  Jumboo Savari, the grand finale of Dasara festival, is no doubt the prime attraction in Mysuru especially when the 750-kg Golden Howdah is carried by the mighty Arjuna. Many are unaware of the intricate preparations to be made before the Howdah could be mounted on the back of the elephant.

The howdah is actually placed on a thick mattress which is fastened to the back of the elephant using jute ropes. With just five days to go for the grand Jumboo Savari on Oct. 8, two Mahouts are busy preparing Gaadhi and Namdha for Arjuna, in Palace premises.

Experienced Mahouts Pasha and Zakaullah are fully engaged in making the two items at the space in front of Sri Kodi Someshwara Temple. The Gaadhi and Namdha, which provide a cushion against the weight of the Golden Howdah, are traditionally in use for decades.

The Gaadhi is prepared using grass grown on water tank beds and it provides a cushioning effect and also protects the elephant from getting injured during the nearly 5-kilometre-long procession route.

The Gaadhi making requires special skills and Pasha and Zakaullah are experts in that. While Zakaullah retired several years ago after serving as a Mahout for female elephant Chaitra, Pasha too has retired from service as Sarala’s Mahout.

The Gaadhi measures 6 ft in length and 5 ft in width and will have a square-shaped hole at the centre which helps perfect placing of the Howdah on top of the elephant.

A good 20 days before the Jumboo Savari, grass grown on river and tank beds are collected and dried in sunlight. As the grass is soft, it does not absorb moisture. The dried grass is later stuffed in cut gunny bags and then stitched to ensure that the bag does not open up at any point of time.

The Namdha, which is in the shape and size of a bed having 6 inch thickness, is made using a coconut ingredient. After the Gaadhi is kept atop the elephant, the Namdha is placed on it and covered with Joola, a type of decorative cloth. Chapu is the top most layered thick cloth cover.

Zakaullah and Pasha, who have been in Gaadhi and Namdha making business after their retirement, are now training other Mahouts and Kavadis in making them. Their passion for the job and love of elephants has been recognised by the Forest Department which calls them every year for the job.

The two, who are nearly 75 years old, do not want the art to die and as such, a good amount of training is provided to other Mahouts and Kavadis. They both also weave the thick jute rope from strands which takes about three days to make.