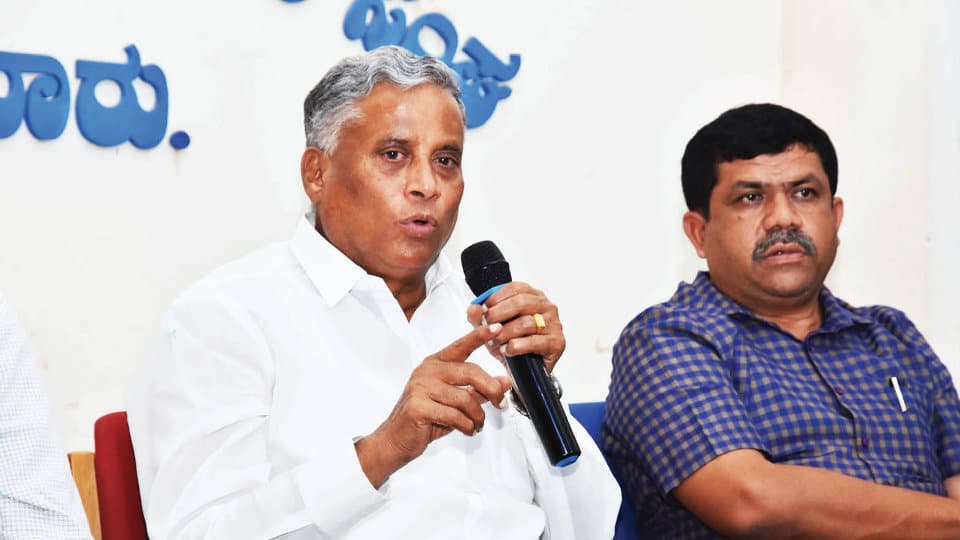 Somanna interacts with journalists, stresses on setting up of Dasara Authority

Mysuru: With a view to encourage tourism in Mysuru during Dasara, the State Government is likely to exempt tax payable in the State for vehicles registered outside Karnataka. The exemption is likely to be granted under the Motor Vehicles Taxation Act, 1957 for vehicles registered in States other than Karnataka, covered by special permits issued under Sub-section 8 of Section 88 of the Motor Vehicles Act, 1988.

At an interaction with journalists on Dasara celebrations at Pathrakartara Bhavan in city yesterday, Mysuru District Minister V. Somanna said that the Government would take necessary steps to lift entry tax for all commercial vehicles during Dasara to facilitate holiday visitors. “I will speak to Chief Minister B.S. Yediyurappa in this regard and I know that there has been a demand from the tourist sector,” he said.

Compared with other tourist-friendly States, the inter-State Motor Vehicle Tax Policy in Karnataka is a stumbling block. The policy is in place since 2007 and the RTO authorities agree that the vehicle tax structure is higher as compared to some of the other States.

“I will direct RTO authorities not to restrict any tourist vehicles during Dasara and will get the exemption in entire State after discussing with the CM,” he added.

On setting up of a permanent Dasara Authority, the Minister said that there has been a demand from various quarters to set up the Authority as it can be a binding force that unites all Government bodies and can take up unified development works instead of each Government Department taking up works separately.

“Yes, there is a necessity of Dasara Authority and it can be set up and a Chairman can be appointed. But this is not an easy job as the modalities have to be worked out. I will discuss the issue with CM Yediyurappa after the Dasara celebrations,” Somanna said.

Stressing on Dasara publicity that plays a keyrole in attracting tourists from far and wide, the Minister said that promotional posters have been displayed in 15 trains and over 2,000 buses.

A minimum of 10 Dasara promotion hoardings will be put up in all District headquarters and a message from the CM will be screened in bus stands, railway stations and airports. A Dasara magazine too will be printed,  he added.

Somanna said that the illumination of prominent roads, junctions and buildings in Mysuru will continue till Oct.17.

“The Chamundeshwari Electricity Supply Corporation (CESC) had been told to continue illumination till the Thepotsava atop Chamundi Hill on Oct.17. Illumination will be extended to ensure that the flow of tourists does not fall after Vijayadashami procession,” he said.

Somanna also promised to look into various issues ranging from Dasara gold/ general passes, conveyance to artistes and their payments.

“The Dasara Gold Card will be sold for Rs.2,500 and the rates have been slashed to encourage more and more people to buy the Gold Card. Earlier, one pass would be used by two to three persons. This year, systems will be placed to prevent duplication,” he added.

READ ALSO  15,000 bulbs in Mysore Palace to be replaced

On the security aspect, the Minister said that this year there will be a number of tourists visiting Dasara and the crowds will surge when compared to the previous years.

“As such, the Police have been directed to ensure security and vigilance. Tourists will not be inconvenienced and any situation will be dealt within the framework of law. I will request the Home Minister to deploy more Policemen and other State security forces to ensure that law and order is maintained,” he said.