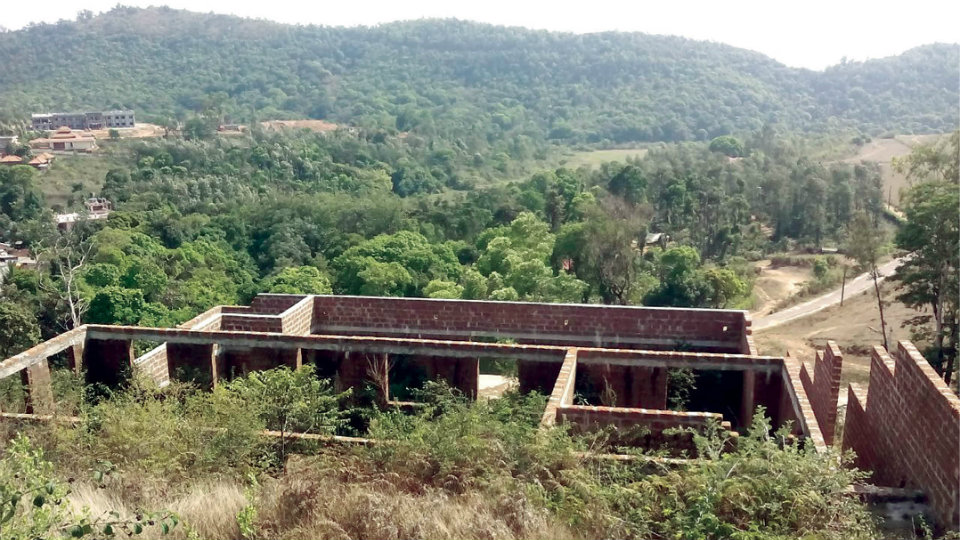 Some hope about Kodava Heritage Centre and Museum at Madikeri

Madikeri: The ‘Kodava Heritage Centre,’ Madikeri, envisaged by the Government in 2009-10 for introducing the unique Ainmane tradition of Kodavas with a Museum, is now in a limbo.

When the project was envisaged in 2009-10, the cost of the project was estimated at Rs. 1.45 crore, but now the estimate has almost doubled to Rs. 2.68 crore. The Kodava Heritage Centre project features an Ainmane, a hall, small indoor water pond, an open auditorium, a library, a museum and drinking water facility.

Though the project took off, there is not much progress in the civil works.  The project is coming up in a 4-acre land at Karavale Badaga village on the outskirts of Madikeri city, near Mahindra Holiday Resort.

The project was launched on Sept. 21, 2011 and only the walls of the structure were built so far. There are complaints of poor quality work while some have also raised objection accusing the authorities of improper planning and architecture. Over the years, the granite stones used for the steps have come apart and the incomplete walls have become dilapidated, unable to withstand the vagaries of nature.

With the project lying in limbo for eight long years, the people are wondering whether the project, which is expected to become a major tourist attraction when wholly executed, will be completed at all. The people are also questioning the commitment of Legislators of the district.

Surprised and upset over the undue delay in the execution of the project, Kodagu Deputy Commissioner Annies Kanmani Joy, who is also the Kodagu District Tourism Development Committee Chairperson, held a meeting on Sept. 6, during which she ordered the officials to expedite the project.

Later, Tourism Minister C.T. Ravi held a meeting with officials on Sept. 11, when the Minister received inputs on the measures taken for development of tourist spots in the district. At the meeting, the Minister was shocked to learn that an important tourism project like Kodava Heritage Centre was lying in limbo for the past eight years.

PWD Executive Engineer Ibrahim had said that the estimated cost of the project was Rs. 2.68 crore and the contractor had completed half of the works, for which he was paid Rs. 1.68 crore.

Speaking to Star of Mysore on the issue, Assistant Director of Tourism, Kodagu, Raghavendra, said that the PWD is executing the Kodava Heritage Centre project coming up at a four-acre elevated plot at Karavale Badaga village.

Saying that the cost of the project is Rs. 2.68 crore, Raghavendra said that the PWD has initiated steps to recover Rs. 20 lakh from the erring contractor for non-completion of works.

PWD Executive Engineer Ibrahim, who also spoke to SOM, said that only one company had responded to the tenders invited by the Department. But now as the contractor has defaulted, a fresh e-procurement tender has been invited.

READ ALSO  Is there an end to Kodagu’s flood misery ?

The Department’s higher authorities have recommended blacklisting of the earlier contractor and also recover the money paid to him in excess, he said.

The ambitious Kodava Heritage Centre, which was launched on Sept. 21, 2011, was supposed to be complete by Sept. 21, 2012 and handed over to the Tourism Department.

But only half of the works have been completed, which shows official and political class apathy in the execution of projects, which would further boost tourism in the hilly district.