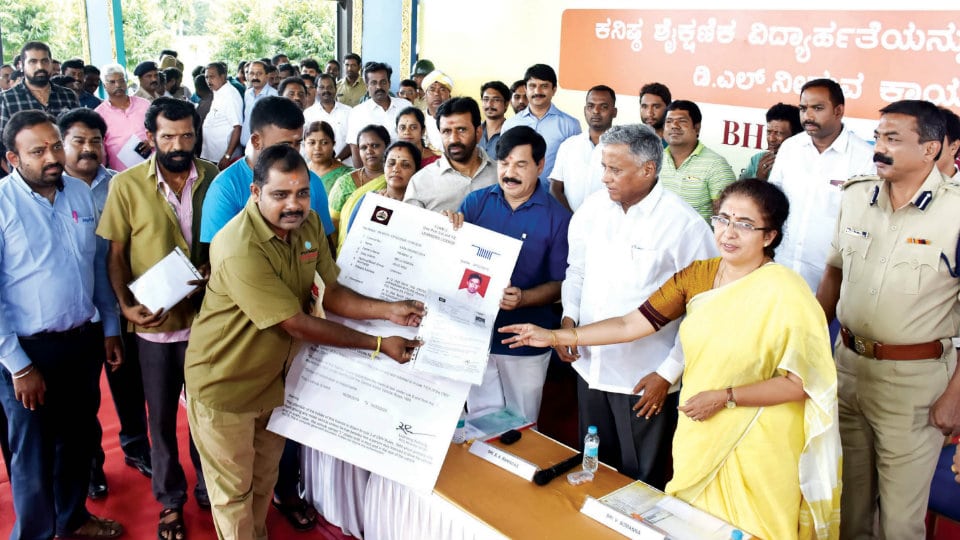 Mysuru: District Minister V. Somanna has maintained that K.R. MLA and former Minister S.A. Ramdas played a keyrole in the Centre’s decision to scrap the minimum educational requirement of a pass in eight standard for issuance of Driving License (DL).

Highlighting the efforts of Ramdas for organising the drive, Somanna said that Ramdas, along with late Union Minister Ananth Kumar, strived a lot for persuading the Centre to drop the minimum education qualification (8th standard) rule for the issuance of DL.

Lauding Ramdas for organising the DL drive, the Minister said that the drive was very useful at a time when the Prime Minister’s birthday is being celebrated as ‘Bharat Vikas Diwas.’

Pointing out that earlier a pass in eight standard was mandatory for getting a DL, Ramdas said that he extensively toured the country and discussed the issue with Vehicle Driver Unions and Associations, following which he submitted a comprehensive report, seeking scrapping of the minimum educational qualification rule.

Following his report, the Union Government, headed by Modi, made an amendment to the Motor Vehicles Act, scrapping the minimum educational qualification rule and the amendment has been ratified by the Parliament, he said and added that the amended rule has come into effect from Sept.1.

Thousands of DL seekers from across the State, including from far off places such as Shivamogga, Chitradurga and Ballari, attended the drive. A majority of DL seekers were men, while women were less in number.

Driving Licence S.A. Ramadas V. Somanna
Puttaraju miffed at not being invited for Somanna’s road inspection
Some hope about Kodava Heritage Centre and Museum at Madikeri