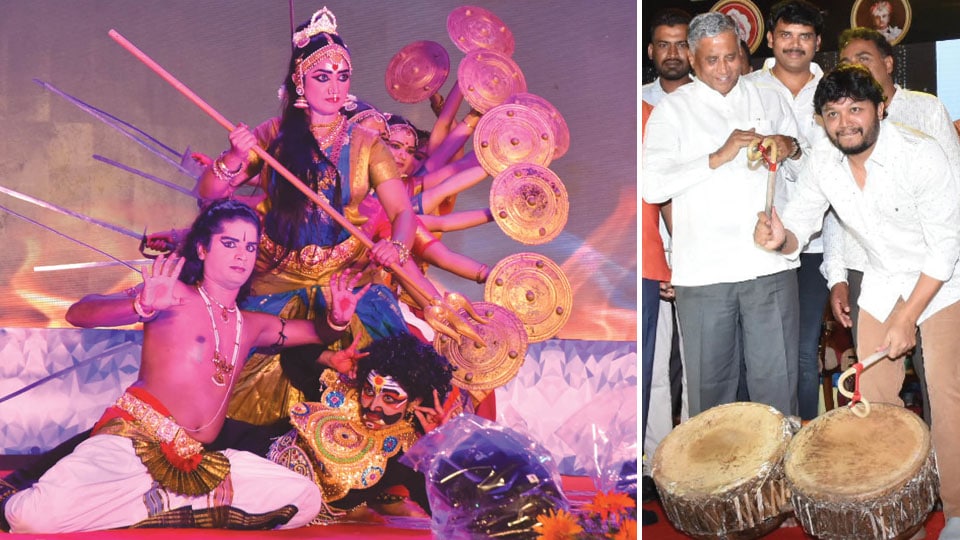 Mysuru: It was gay abandon for youngsters at the Open Air Theatre in Manasagangothri as the most-awaited ‘Yuva Sambhrama,’ a cultural treat organised as a part of Dasara celebrations for the college students to showcase their talent, began yesterday.

The 10-day event was inaugurated by ‘Golden Star’ Ganesh amidst a loud cheer by the students and fans present at the venue.

Before his address, the cine actor greeted the audience in his old style by saying ‘Namaskara Namaskara Namaskara’ taking everyone back to the days when he started his career as a host for a popular programme on television. Stating that one should not stop dreaming, Ganesh said that there was a golden star and super star in every student present at the venue. Later, the actor entertained the audience through rendition of the song ‘Geeta… Sangeetha…’ from the movie Geeta starring Shankar Nag.

He also sang one of his most popular songs ‘Anisuthide Yako Indu…’ from his first movie Mungaru Male. Ganesh also promoted his upcoming movie titled Geeta which is ready for the release. The trailer of the movie was screened at the venue.

He then delivered a dialogue ‘Karnatakadalli Kannadigane Yajamana Sarvabauma’ to which the students applauded and blew whistles as well. The actor was also presented a portrait of his own by a city based artiste Puneeth.

The best teams selected will perform during the ‘Yuva Dasara’ programme to be held at Maharaja’s College Grounds. The organisers also released the posters of Dasara Film Festival and Dasara Flower Show on the occasion.