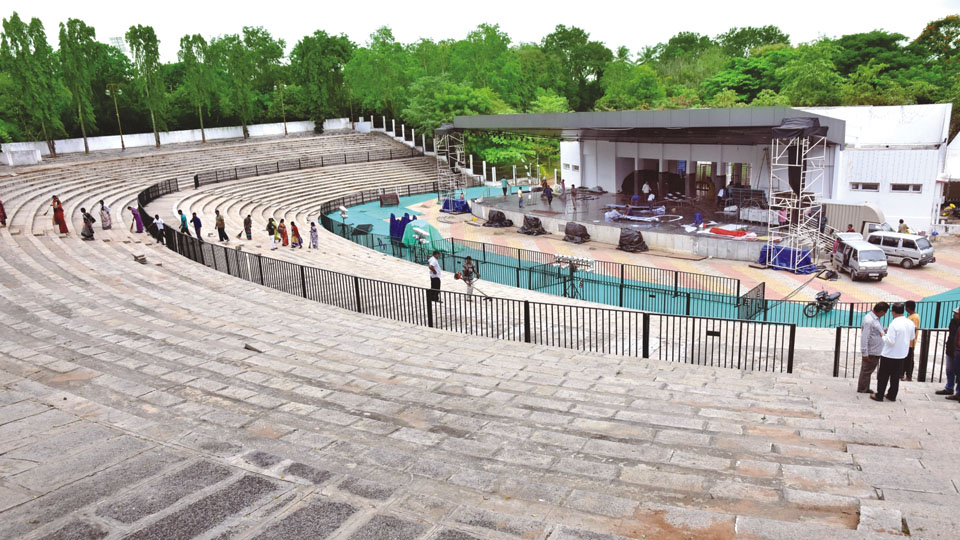 Mysuru:  Dasara mood has set in and as a prelude to this, Yuva Sambhrama, the most popular event for the youths, will begin from Sept. 17 at the sprawling Open Air Theatre in Manasagangothri, from 5.30 pm to 10.30 pm.

Hectic preparations are on to organise the Yuva Sambhrama in a grand way and a giant stage has already been set up. Workers, designers, sound and light engineers and acoustic experts are racing against time to meet  tomorrow evening’s deadline.

The Open Air Theatre has a seating capacity of over 15,000 and this apart, 2,000 chairs will be placed in front of the stage for VVIPs and guests.

There will be three gates to enter the venue and metal detectors are being installed to check each visitor. Last night, a trial of sound and light was held and the movements of focus-lights, coloured lights and long-distance revolving lights were checked.

The popularity of this event has grown multi-fold over the years and this year, a whopping 260 teams from across the State will perform during the 10-day cultural festival that will conclude on Sept. 26. The best teams of Yuva Sambhrama are provided an opportunity to perform in Yuva Dasara scheduled to be held between Sept. 30 and Oct. 6, at Maharaja’s College Grounds.

Usually, youths and students from Mysuru, Mandya, Kodagu and Chamarajanagar participate in Yuva Sambhrama . The event has become so popular that this year, several schools, colleges and youths from North Karnataka region are demanding for an opportunity to participate in Yuva Sambhrama . They have got entries from colleges in Dharwad and Shivamogga.

While last year, 162 teams had participated in the 8-day event, this year, the organisers have received 278 applications and the event has been extended to 10 days. Over 20 teams will perform every day and in 10 days, there will be more than 1,000 performers. Each team will be allotted 8 to 10 minutes to perform.

Theme-based performance: On the inaugural day tomorrow, 20 colleges will set the stage on fire with their performances.

Incentive of Rs. 7,500: Each participating team will have 25 to 50 performers and they will have to pay Rs. 500 as casting charge and Rs. 100 as practice fee. As an incentive to each team, the District Administration will pay Rs. 7,500 to each team. This incentive budget alone will come up to Rs. 19,50,000 for 260 teams. Also, KSRTC bus fares will be given to all outstation participants.

On complaints that last year the team incentive was not paid to many colleges, Superintendent of Police C.B. Ryshyanth, who is  the Chairman of Yuva Sambhrama  Sub-Committee, said that this year, cheques to the teams will be given on-the-spot. “Last year, teams did not receive the money as it was decided to transfer the money directly to accounts through RTGS and many colleges had wrongly mentioned the account numbers,” he said. This year, cheques will be handed over soon after the performance, he added.