Home » News » ‘Savarkar: Echoes from a Forgotten Past’ book release 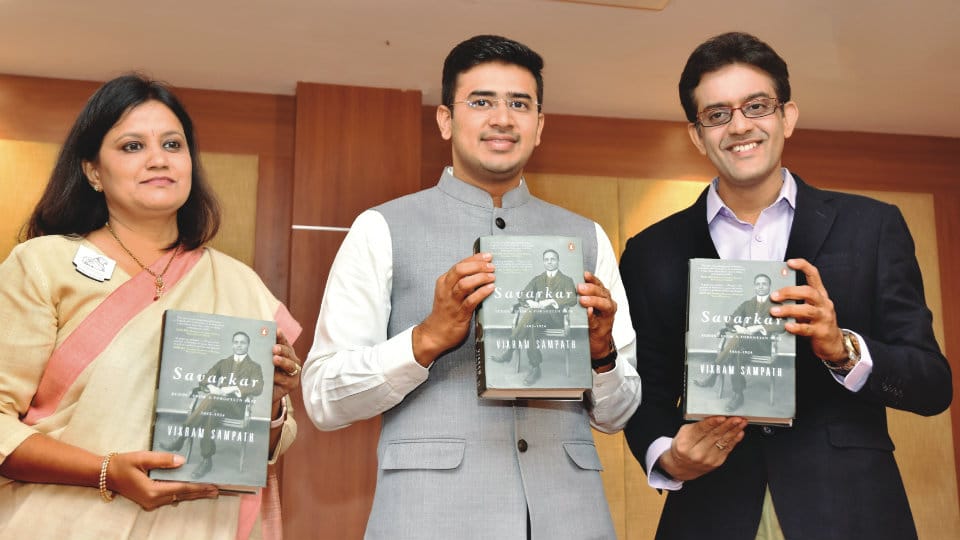 ‘Savarkar: Echoes from a Forgotten Past’ book release

He was speaking after releasing the book ‘Savarkar: Echoes from a Forgotten Past’ by Vikram Sampath, at Hotel Southern Star last evening. Addressing a packed hall, he said, Savarkar was a great patriot and social reformer. “People who go to Pakistan to apologise on behalf of India and those who are afraid of losing elections and go to Kerala’s Wayanad to contest cannot consider Savarkar as a leader.

Along with Hindu consolidation, Savarkar had spoken about the need for establishing diplomatic relationship with Israel. But our past leaders, fearing that this friendship with Israel would lose votes in Bengaluru’s Shivajinagar and Mysuru’s N.R. Mohalla, showed their petty mindedness in not recognising the benefits of friendship with Israel for India, he caustically remarked.

When patriot Savarkar was languishing in Andaman and Nicobar Island’s Cellular Jail, Pandit Nehru was busy Discovering India and writing letters to his daughter sitting in the confines of great luxury and comfort. Obviously the reference was to the book ‘Discovery of India’ written by Nehru. Tejasvi Surya regretted that Savarkar was not given the rightful place in India’s history both as a freedom fighter and a social reformer.

The history writers, who were serving the political masters, have done injustice to Savarkar by not recording his contributions. Patriot, revolutionary, and social reformer, Savarkar had written 10,000 patriotic songs with his finger nails on the jail walls when he was refused a pen and paper. Though  it was erased, those verses were published when came out as he had committed them to his memory, said Surya, drawing huge applause from the audience.

Along with this, Savarkar who had spoken about inter-caste marriages, sahapankti bhojana (community meal), widow remarriage, had also exhorted the people to come out of ‘Saptabandha’ relations and become social activists. He had a dream of Hindu consolidation in other parts of the world too. As a prelude to this, Prime Minister Narendra Modi is trying to establish a strong relationship with Israel. In the ‘Howdy Modi’ rally in Houston, USA, to be held on Sept.22, in which 50,000 Indians are going to be present, President Donald Trump himself has asked ‘whether I could participate,’ he said (Howdy slang means ‘How are you?’).

Savarkar was a strong opponent of untouchability. He believed that in everyone’s body same blood flows and he wanted to create this awareness among everyone. If anyone gave full cooperation to Dr. Ambedkar, it was only Savarkar. He had questioned the society as to how anyone could treat a man of letters like Ambedkar as an untouchable, asked Surya.

A man with a poet’s heart and also a revolutionary, Savarkar, had long ago written about the country’s youth. “According to me the young Indians must read books by Swami Vivekananda, Dr. B.R. Ambedkar, Aurobindo Ghosh and Savarkar,” said the young, 28-year-old MP.

As history was being crafted to suit the political leaders and their ideas, the true picture was hidden. No proper research was done nor reference given. Writer S.L. Bhyrappa, in his novel ‘Aavrana,’ has given the reference list at the end of the book, may be to make his narrative authentic. Vikram Sampath too has given the list of references at the end of the book about his research. In his book the injustice done to Savarkar has been righted. Just like Dhananjay Keer who had penned the most authentic book on Savarkar, even Vikram Sampath has done justice, said Surya praising the author.

Not a mercy petition

Earlier author Vikram Sampath, who was in conversation with Vasanthi Hariprakash, Founder Editor, Pickle Jar, recalled his association with Mysuru and how he was mesmerised by the tales of the royal dynasty which his grandmother used to share with him. This resulted in the book ‘Splendours of Royal Mysore: The Untold Story of the Wodeyars.’

Asked about the petition Savarkar gave to the British to release his jailmates, he said that there is false propaganda about the petition by calling it mercy petition. He said that a patriot and social reformer like Savarkar never gave a ‘mercy petition,’ it was a petition in which he said if the request is refused because of him, then he would remain in jail and others may be released.

In the question and answer that followed, Sampath wished that a relook was needed into Savarkar’s real thoughts and ideas, and said that earlier Hindutva was not a big political force but in today’s times it had grown into one. A patriot like the revolutionary Savarkar was being shown in poor light, he said in reply to another question and his aim as a historian was to throw light on such a great leader who was deliberately sidetracked.

He also pointed out that the present book was from the time of Savarkar’s birth in 1883 to 1924 and he was penning the second part which is likely to be released at the end of next year.

In another question posed by an audience, whether Savarkar’s photo could also be used on currency notes like Gandhiji’s, Samapth said that he was not the right person to answer that and then Tejasvi Surya, MP, deftly sidelined the question with a quip, “Right now that question is not all that important. We have to see whether we have enough currency in our pockets.”

However, after a pause, Surya said that he had given it a thought and written to the Prime Minister about it saying that the American currency system could be followed where the faces of many leaders like Thomas Jefferson, George Washington and others are printed on currencies of different denominations.

In reply to another question by Editor-in-Chief of Star of Mysore and Mysuru Mithra, K.B. Ganapathy, whether the name plaque of Veer Savarkar, which was removed by the Congress Government, was restored in the Cellular Jail in the Andamans, Sampath said that it had been done.

6 COMMENTS ON THIS POST To “‘Savarkar: Echoes from a Forgotten Past’ book release”