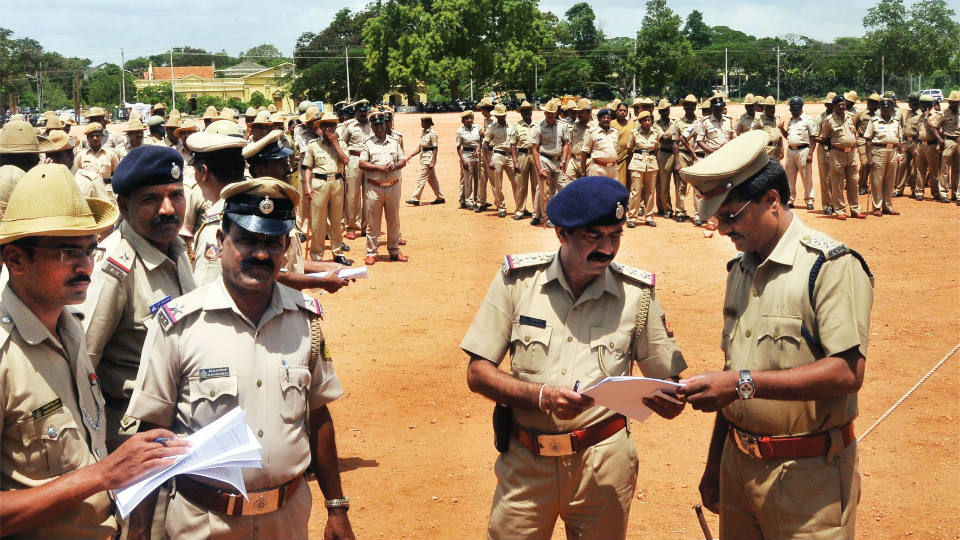 City Police geared up for Ashada Shukravara rush atop Ch’Hill

Mysuru: More than 300 Police personnel will provide security to lakhs of devotees who will congregate at  Chamundeshwari temple atop the Hill on Ashada Shukravara beginning tomorrow (June 30).

The K.R. Sub-Division under whose limit the Chamundi Temple comes has made bandobust. Traffic ACP K.N. Madaiah is in charge of traffic management at the Helipad and atop the Hill.

The reigning deity of the city Goddess Chamundeshwari, is the most appealing deity and as a result, lakhs of people throng the hill temple during Ashada Shukravara.

The District Administration, the temple authorities and the Police rise to the occasion fully geared up for the preparation to make it smooth for the devotees to have the darshan of the Goddess.

Each year, the planning and arrangements are very good and this year it is no different. The temple has been specially decorated, even as drinking water has been arranged for the vast influx of people. Barricades have been erected to regulate queues and separate arrangements have been made for the devotees who want to donate prasadams.

The KSRTC has made special arrangements to ferry people from helipad near Lalitha Mahal Palace Hotel to the Chamundeshwari temple free of cost.

The entry of vehicles has been banned and those who come in their cars or two wheelers have to park their vehicles near the Helipad where all arrangements have been made to accommodate the vehicles. The buses will ply from early in the morning at 4.30  till late in the night during Ashada Shukravara days on June 30, July 7, July 14 and July 21 and also on Chamundeshwari Vardhanthi on July 16.

However, vehicle passes will be issued to VVIPs who can drive up the hill and park their vehicles. But the number of passes have been restricted this time.

The abhisheka at the temple will begin at 3.30 am and the darshan will start at 5.30 am and go on till 11.30 am. If the crowd of devotees is long then the timing will be extended until everyone gets an opportunity to offer puja.

The District Administration has made all arrangements for the devotees to have a hassle-free darshan, while Chamundi Temple Chief Priest Shashishekar Dixit is leading a team of priests making all arrangements at the temple so that the lakhs of devotees who visit the temple on all four Fridays have a good darshan of the Goddess.

The MCC as part of its cleanliness drive has seized 25 kg of plastic from various shops atop the hill. The authorities have warned the shops that stringent action will be taken against those who give plastic bags, as the Hill is declared as a plastic-free area. Zone 9 AC Puttasheshagiri, Corporation Health Officer Dr H. Ramachandrappa, Environment Officer Chetan, Abyaya Team 9 and Health Inspector are in charge of maintaining cleanliness.