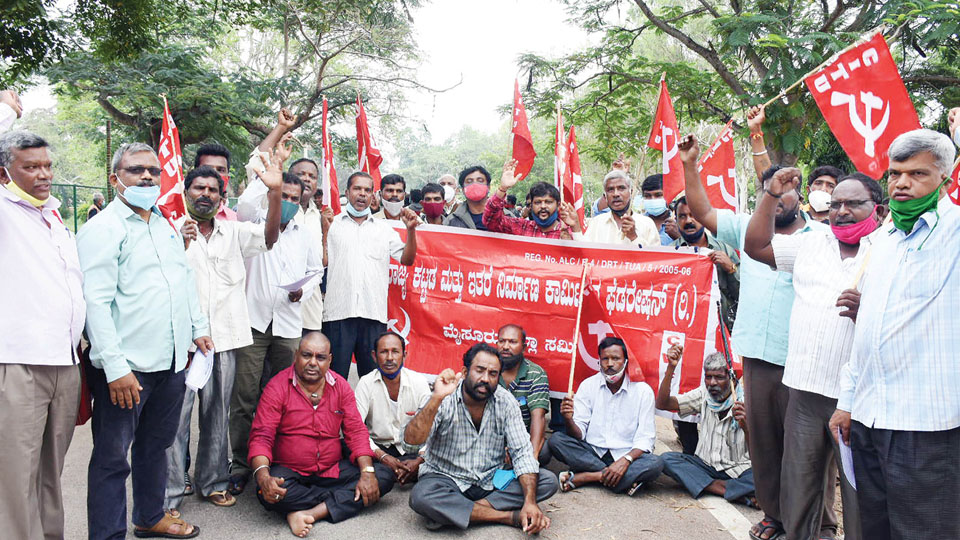 As part of a nationwide strike, members of Karnataka State Construction and Other Workers Federation staged a protest in front of the Deputy Commissioner’s (DC) Office seeking fulfilment of various demands.

The demands included implementation of provisions of The Building and Other Construction Workers (Regulation of Employment and Condition of Services), Act, 1996, saving of Labour Welfare Board, measures to check rising prices of construction materials, reduction in GST on construction materials, preference to registered local construction workers in construction contracts, mandatory holiday on Sunday for all workers, appointment of Labour Inspectors in all Taluks, holding of Tri-quarterly meetings for ensuring safety, health and welfare of workers, payment of Rs.3,000 lockdown relief announced by the Government to all applicants, raising of compensation to Rs.10 lakh in case of death at work-spots and financial assistance of Rs.5 lakh for construction workers to build their own homes.

In another protest at the same venue, members of BMS (Bharatiya Mazdoor Sangh)-affiliated Ideal Jawa Employees Association staged a demonstration seeking payment of all statutory monetary  benefits that are due to them. Maintaining that the city’s iconic Ideal Jawa factory was shut down in 1995, the protestors contended that statutory benefits has amounted to Rs.10 lakh for a majority of employees since then whose claims were rejected for unfair reasons.

READ ALSO  Concor project: No end in sight to impasse

In yet another protest at the DC Office, members of Mysuru District Unit of Mahanayaka Rakshana Vedike, in association with Pragatipara Raitha Sanghatane, staged a demonstration accusing Mysuru Minerals (Pvt.) Ltd., of unauthorised mining in the agricultural lands of farmers.

Charging the Company of encroaching upon farm lands for carrying out Bauxite mining activities in various Survey numbers coming under Karya, Chamanamadahalli and Kurihundi villages of  Hullahalli Hobli  in Nanjangud taluk, the protestors  urged the Government to order a probe into the alleged illegal mining activities and to take action against officials and all others who were supporting the Company.

In the fourth protest, over 50 members of SUCI (Socialist Unity Centre of India) staged a demonstration in front of CESC Office on Sriharsha Road seeking repeal of Electricity (Amendment) Bill, 2021.

Maintaining that the passing of the Bill will cause a steep hike in power prices, privatisation of the power sector and monopoly in power production, transmission and distribution, they urged the Union Government not to introduce the Bill in the Parliament and instead repeal it in the better interests of power consumers.