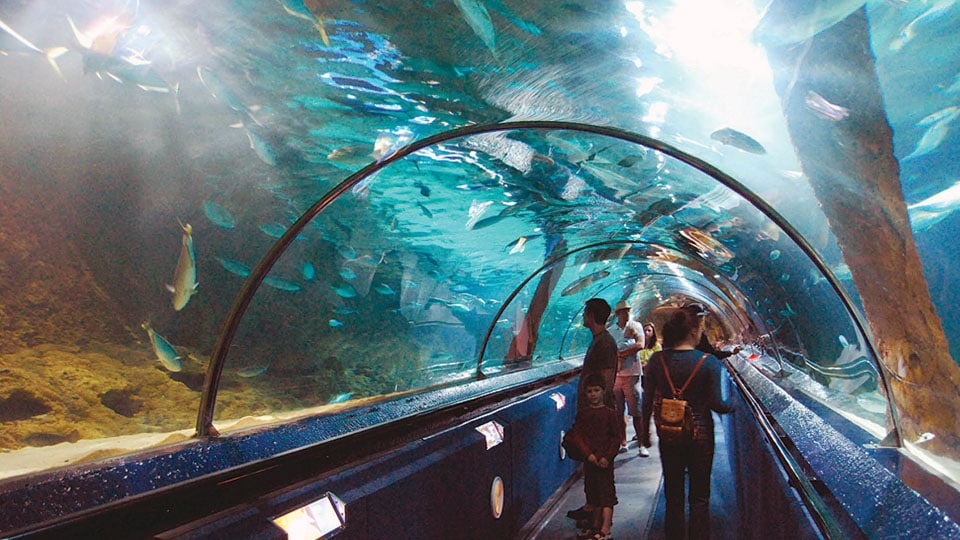 Mysore: The Zoo Authority of Karnataka (ZAK) is in the process of scouting for designers who can build a world-class aquarium that will attract lakhs of tourists to the much-delayed aquarium at the premises of Sri Chamarajendra Zoological Gardens (Mysuru Zoo).

After taking over the half-built and desolate aquarium from the Mysuru City Corporation (MCC), the ZAK has identified a New Zealand firm to complete the aquarium project and has sent a proposal to the State Government for approval.

Speaking to Star of Mysore this morning, Mysuru Zoo Executive Director Ajit M. Kulkarni said that at present the New Zealand firm is engaged in building a world-class Aquatic Life Science Park in the Science City of Gujarat in Ahmedabad.

Though he did not mention the firm’s name, SOM learnt that the Rs.257 crore project is being executed in Ahmedabad by Marinescape, pioneers of underwater aquariums. The Company is an established leader in the walk-through aquarium design, construction and management of 24 successfully operated and profitable public aquariums around the world. Over 250 million satisfied people have been entertained and educated by Marinescape Aquariums worldwide.

The Science City Aquatics Gallery in Ahmedabad is spread over 13,000 square meters. It is being executed to have 72 types of different exhibits ranging from small to giant sea creatures.

The exhibit will have a total of 12,000 fishes across 200 types from all over the world including American and African spices.

Meanwhile, a team from Marinescape which visited the Zoo aquarium in Mysuru a few months back had expressed interest in developing the aquarium.

“When compared to the Rs.257-crore Aquatic Life Science Park in Ahmedabad, ours is a much smaller project and we felt that the New Zealand Company has the technical knowhow and the capacity to refurbish our aquarium. Since the structure already exists, it will be easy for that company to develop the design and implement the structure,” Kulkarni said.

During the discussion with the New Zealand team, the ZAK officials found that the firm can do something special to the Mysuru Zoo aquarium and develop it as an international-standard walk-through aquarium. “We felt that the company has the competency to execute the project in a better way as it has the experience of implementing such projects worldwide. We have already sent a proposal to the Karnataka Government recommending the company’s name for our project and the proposal is with the Department concerned. We are awaiting approval,” he said.

Kulkarni also told SOM that he, along with ZAK Member-Secretary B.P. Ravi, had been to Ahmedabad Science City Aquatic Park early this month to see the aquarium works. “We visited the aquarium during our trip to Sakkarbaug Zoo to set the process in motion to get five Asiatic Lions to Mysuru Zoo. The aquarium work was impressive and professional,” he added.

As an alternative, the ZAK also plans to use the Swiss Challenge method to decide on winning bidders for the Mysuru Zoo aquarium works.

A Swiss Challenge is a method

of bidding, often used in public projects, in which an interested party initiates a proposal for a contract or the bid for a project. The Government then puts the details of the project out in the public and invites proposals from others interested in executing it. On the receipt of these bids, the original contractor gets an opportunity to match the best bid.

The Swiss Challenge method allows a seller to mix-and-match the features of both an open auction and a closed tender to discover the best price for an asset. “This will ensure transparency in the project implementation,” Kulkarni added.