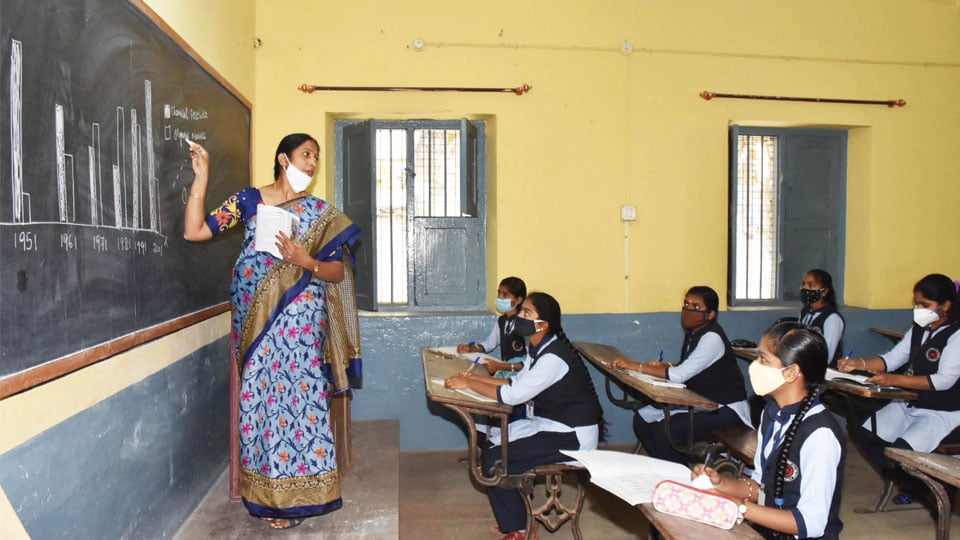 Classes 10, 12 reopen on a cautious note in Mysuru

Mysore/Mysuru: Classes 10 and 12 reopened this morning for offline classes and institutions — both Government and private — reported 20 percent attendance. While Education Department officers say that there will be 100 percent attendance from Monday, Jan. 4 as today is Friday and a weekend is ahead, teachers are sceptic and say that only 40 to 50 percent students will attend classes.

The State Government allowed reopening of schools for students of Classes 10 and 12 from today. The Department of Public Instruction and the Department of Pre-University Education has made elaborate arrangements to conduct classes in adherence to COVID-19 advisory.

There were hardly six to eight students in each class and they were made to sit two per bench and 15 per room. In PU colleges, the subjects were bifurcated and while science and commerce classes were held in the morning, arts students were asked to come for the afternoon session.

Classes under Vidyagama programme was conducted from classes 6 to 9 and here too there was thin attendance. As the classes were not compulsory, many students preferred to stay at home for safety reasons. Parents too are reluctant to send the children to schools despite the tall claims of safety made by the Government.

While all the children who attended classes today wore masks, a few of them wore gloves and body protection gowns, hoods and goggles. Students were guided by schools not to touch their faces and not to share food and water. Thermal screening and sanitising of hands were done at the entrance and social distancing boxes were drawn wherever students had to stand in queues.

READ ALSO  Out of State returnees cannot be forced to stay in hotels: DC

Students attending classes at Maharaja’s College and Maharani’s College said that it was difficult to access online classes at home due to poor internet connectivity and physical classes were best to perform well in exams.

Deputy Director of Public Instruction (DDPI) Panduranga told Star of Mysore that from Monday, 100 percent students would attend classes and arrangements have been made.

Teachers and parents are, however, sceptic and said that only 40 to 50 percent of the children would attend as there is a fear. “Parents are scared and though the Government has taken some precautions, they are not confident of sending children under risk and threat of the virus,” a teacher said.

The Government must take several confidence-building measures to encourage parents to send the children to schools. “Physical classroom is much better than the virtual one, but I cannot take the risk of my daughter getting infected. Ministers make tall promises and our children are really at risk. Who will take the responsibility if there is a virus outbreak,” questioned a parent.

“Parents have to give consent before sending their wards to schools, but they are showing a lukewarm response. Teachers are trying their best to motivate parents, but they are still hesitant,” said a Government school teacher on condition of anonymity.

Some private schools and colleges have both offline and online system of classes. Parents pointed to the toll the reopening will take on teachers as the same topics will need to be covered separately for those who come to school and those who choose to remain at home.

As a precautionary measure, isolation rooms have been set up in every school to accommodate students who develop fever and cold and cough during classes.

Meanwhile, sale of junk food, fruits and all other kinds of eatables has been banned and no outsiders would be allowed to enter school premises during school hours.