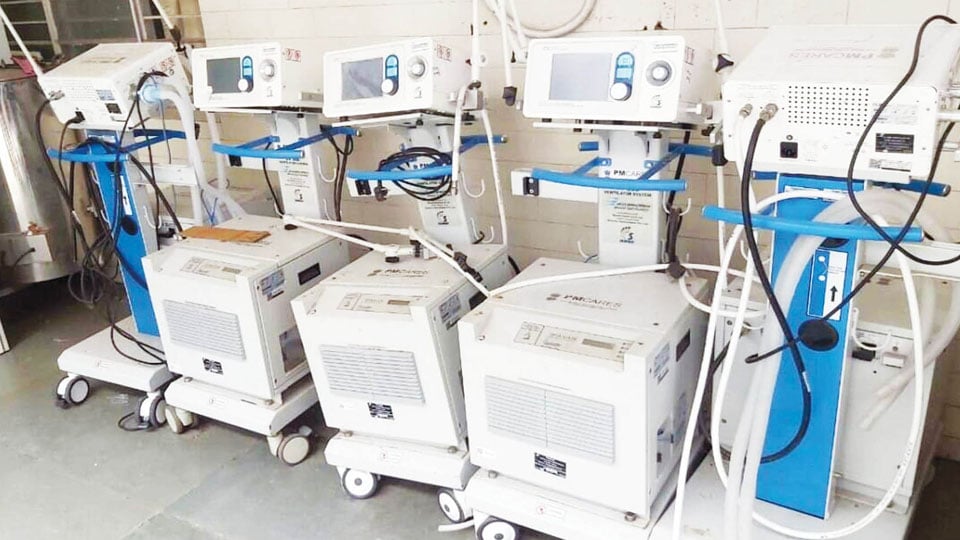 Mysore/Mysuru: The fight against deadly COVID-19 is far from over and it has only intensified in Mysuru with the daily spike in cases.

While a majority of cases being detected are asymptomatic and the patients opt for home isolation, the concern is medical care for those with severe symptoms. Most of the patients experiencing breathing difficulties are in need of ventilator support and Hospitals, both Government and Private, are in clear need of additional ventilator beds.

There is a real shortage of ventilator beds and oxygen at several hospitals due to rising number of patients in need of the same. But shockingly, stocks of ICU ventilators remain sealed and piled up inside Taluk Health Offices in Mysuru for want of intensivists (doctors in the care of critically ill patients, usually in an ICU) and clinical specialists.

These high-end ventilators have been handed over to the Karnataka Government last year through PM CARES Fund and have not been put to use till now. While there is no visibility of unused ventilators in Mysuru Taluk, over six ICU ventilators are lying at H.D. Kote Taluk Hospital.

On May 2, H.D. Kote MLA Anil Chikkamadu and Hunsur MLA H.P. Manjunath told reporters after launching the Congress COVID War Room in Mysuru city that ICU ventilators were lying unused at a time when patients in need of such beds are being rushed to Mysuru.

“These ventilators can only be used after qualified hands are recruited. There is not even an indication from the Government that recruitments would happen any time soon. We also need Physicians,” Anil Chikkamadu said.

READ ALSO  ‘One mistake will wash away all your good works’

Of the five ventilators given to Hunsur through PM CARES Fund, only three days back three were sent back to Mysuru as there was an urgent requirement and the Hunsur Taluk Health Centre has two ventilators that were made operational recently. There is a requirement for one more ventilator. Hunsur MLA Manjunath said that not only ventilators, but also a CT scan machine that Hunsur Taluk Hospital recently procured is lying unused due to staff shortage.

During first wave, virus had spread only in city and town areas. “Now we are seeing more number of cases in villages. How are we going to manage the crisis,” the MLAs questioned. “We must ensure efficient running of all ventilators at our disposal as well as availability of medical oxygen and lifesaving drugs needed to combat COVID,” they said.

Speaking to Star of Mysore, H.D. Kote Taluk Health Officer Dr. T. Ravikumar said that till now there were no ICU patients and also the Taluk faced a dearth of intensivists and clinical specialists. “After MLA Chikkamadu raised the issue at Taluk COVID Task Force meeting, we have operationalised one ventilator and two are in the process of being operational,” he said.

In Karnataka, over 600 ventilators that were kept unused at warehouses were recently opened and put to use. 30,000 high-end ICU ventilators supplied under PM CARES Fund last year were manufactured by Mysuru-based Skanray Technologies. They were Skanray’s CV200 advanced ICU ventilators manufactured at Bharat Electronics Limited for Government of India.

‘Unused ventilators are a problem across COVID-hit country’

Founder and Managing Director of Skanray Technologies Vishwaprasad Alva told SOM that unused ventilators are a problem that is plaguing across the COVID-hit country. “There are no intensivists, doctors and clinical specialists across the country and successive Governments have done little to fill vacancies. We cannot blame doctors. It is a lapse by the administration,” he said.

Alva regretted that the same enthusiasm that is shown to build new and swanky Government Hospitals is not shown to equip the new Hospitals with medical equipment, oxygen supply, doctors, specialists and nursing staff. “Even at the District Hospital that has been converted into a COVID Hospital, there were no equipment. As recently as three months back, we (Skanray) gave some critical equipment free of cost,” he added.