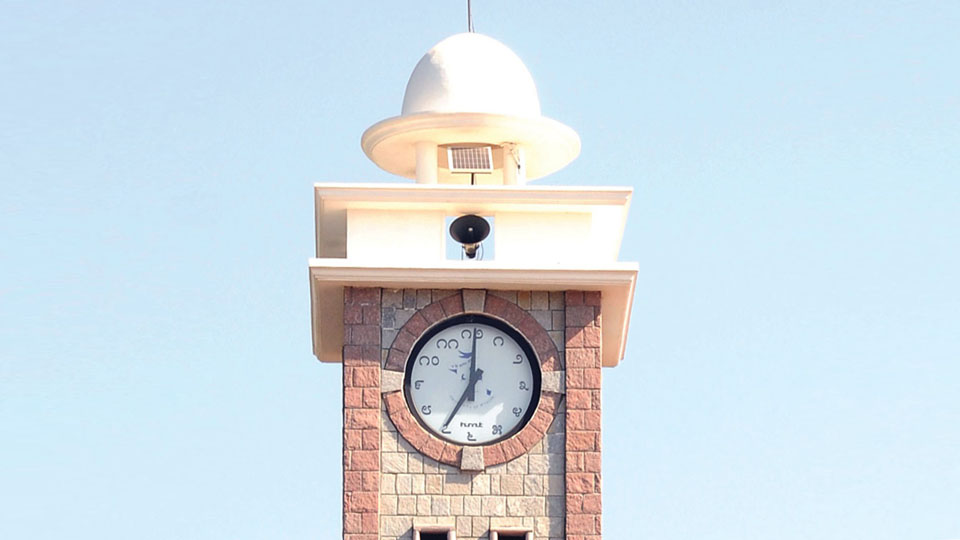 The clocks installed on the Centenary Clock Tower at Manasagangothri has stopped ticking since 7 o’clock on Thursday. People at Manasagangothri campus were surprised to see the clock still showing 7 o’ clock though it was 10.30 am in their wrist watches.

Speaking to Star of Mysore, one of the officials from University of Mysore Engineering section, said that the clock had stopped working owing to some technical problem and the same had been brought to the notice of HMT, which had installed the clock.

He added that the technical personnel from HMT in Bengaluru were expected to arrive today and carry out the repair works.

The 70-feet Clock Tower was constructed as part of the centenary celebrations of University of Mysore. Four clocks with a diameter of 5ft each, specially made by HMT, have been installed on all four sides of the Tower. While three clocks have English, Kannada and Roman digits the other clock has no digits but only lines. It is said that the tower was constructed at a cost Rs. 60 lakh.

The Clock Tower has become one of the major attractions of Manasagangothri. Evening walkers spend some quality time at the place listening to All India Radio which is played every day during the evening hours.