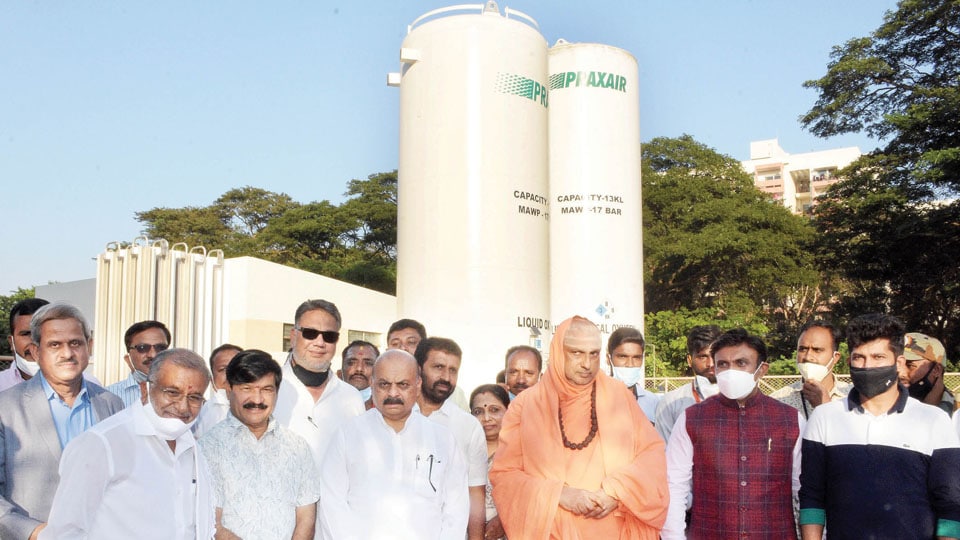 Mysore/Mysuru: Along with many hospitals in Mysuru that have their own oxygen generation plants, the JSS Hospital too has one such plant, thereby increasing the city’s self-sustaining oxygen capacity.

The facility was inaugurated by Chief Minister Basavaraj Bommai in the city on Dec. 26.

The plant has been installed in anticipation of the third wave of the pandemic and it is a VSA Oxygen Generator Plant that produces 1,000 litres of oxygen per minute and will ensure supply to an additional 300 beds.

The plant has increased the number of oxygenated beds to 1,060 at the hospital. Inaugurating the facility, the CM said that JSS Group has been in the forefront of providing food, education and healthcare to the masses and has saved the society in its own way whenever disasters and diseases plagued humanity.

Bommai said that the State Government is committed to the better healthcare of people and at present, work is on to construct over 3,000 well-equipped ICUs. Over 97 percent of citizens have been vaccinated with the first dose and 67 percent with the second dose, he added.

Health Minister Dr. K. Sudhakar released an Android app JSS Shravana Mitra, developed by the hospital’s ENT Department in collaboration with the Department of Electronics and Communication, JSS Science and Technology University. The Minister appreciated the efforts of JSS in developing the app to detect hearing loss at homes with a mobile phone.

JSS Shravana Mitra is an audiometry app and helps in hearing tests. Conventionally hearing is tested using expensive audiometry equipment in soundproof rooms. But the new app can be used as a pre-diagnostic tool with one’s smartphone and using a normal headphone, said authorities.

If the results show hearing loss, the app will advise the users to consult the doctors for further evaluation and the results are interpreted as per the norms prescribed by the World Health Organisation (WHO) and the languages available are English, Kannada, Tamil, Telugu, Malayalam and Hindi. Suttur Seer Sri Shivarathri Deshikendra Swamiji, Mayor Sunanda Palanetra, MLAs G.T. Devegowda, L. Nagendra, Tanveer Sait and S.A. Ramdas, MP Pratap Simha, officers and staff of JSS were present.