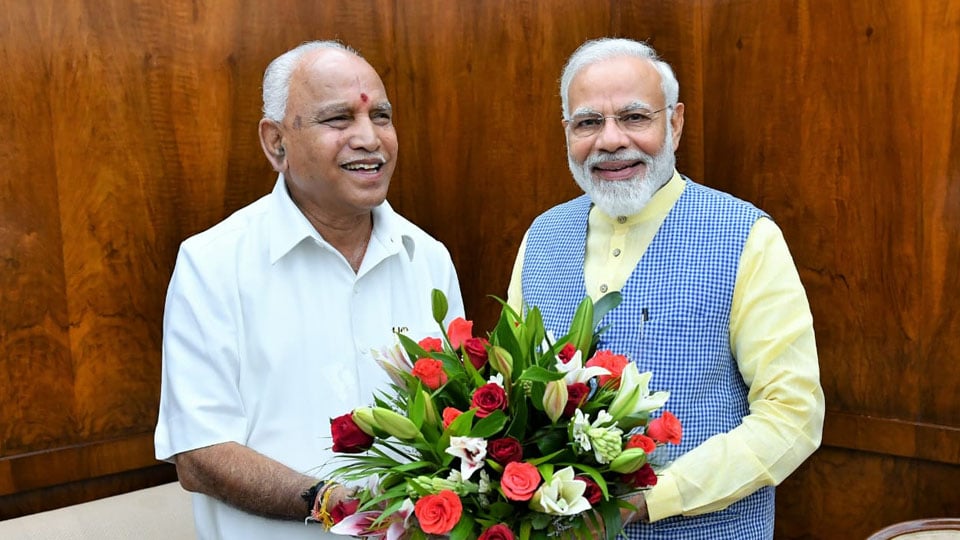 New Delhi: Karnataka Chief Minister B.S. Yediyurappa (BSY) is all set to expand his Cabinet after getting a go ahead from BJP High Command.

BSY, who has been camping in New Delhi since Monday night, met Party Working President J.P. Nadda and held talks regarding expansion. Later, he also met PM  Modi to brief him on flood situation in the State and Cabinet expansion. However, BSY could not meet BJP National President and Union Home Minister Amit Shah yesterday.

Sources said Cabinet expansion is likely to be held on Aug. 9 during which 15 MLAs would be sworn-in as Ministers. Same day Dasara High Power Committee meet has also been convened by the CM.

This time, the party has decided to do away with Deputy Chief Minister’s post and leaders, who had previously worked as CM and Dy.CMs must now work as Ministers in BSY’s Cabinet.

It has also been decided not to leave out the 17 disqualified MLAs who were in a way responsible for BJP to form the Government. However, their inclusion into Cabinet will depend on Supreme Court’s verdict. It is said that in case the SC quashes Speaker’s orders at least 10-12 of disqualified MLAs would make it to the Cabinet and the rest would be given alternate posts.

Yediyurappa, who has been facing flak from the Opposition for the delay in Cabinet expansion, is said to have submitted a list of 20 MLAs, which includes names of Jagadish Shettar, K.S. Eshwarappa, Govind Karjol, R. Ashoka, Umesh Katti, B. Sreeramulu, S. Angara, Kota Srinivasa Poojari, C.T. Ravi, Aravind Limbavali, Suresh Kumar, K.G. Bopaiah, Shashikala Jolle, to J.P. Nadda. The list also includes the name of independent MLA Nagesh who withdrew his support to JD(S)-Congress Coalition Government to support BJP. However, the final list would be announced only after holding consultations with Amit Shah.

Though there are 50-60 party MLAs eyeing for a berth, none of them have spoken in public since the party high command has taken full control over the affairs in the State.

The CM left for Belagavi this morning to monitor the flood situation. His meeting with BJP National President Amit Shah was cancelled owing to the passing away for Sushma Swaraj.