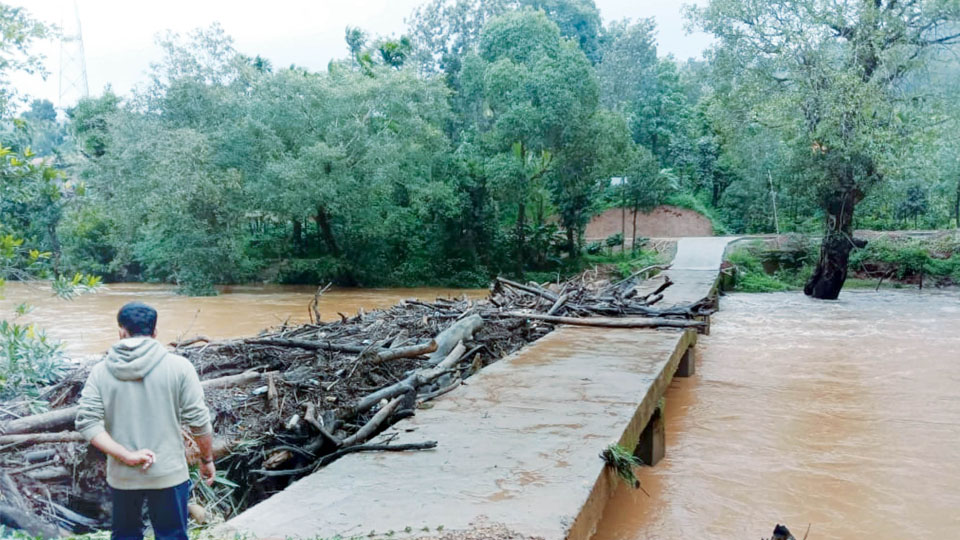 Madikeri / Mysuru: Kodagu District Administration has sounded Red Alert in Coffee District Kodagu till Aug.10 following intensified rain under the influence of South West Monsoon. The decision on whether to extend the alert will be after assessing the rain situation.

With the India Meteorological Department (IMD) forecasting heavy rainfall and issuing ‘Orange and Red’ alerts, the District Administration has taken precautionary measures for carrying out emergency operations. Bhagamandala and Talacauvery have recorded heavy rain since last three days and vehicular movement has been suspended as flood water is flowing on the roads. Triveni Sangama at Bhagamandala was overflowing.

The bridge across River Cauvery across Bethri is likely to submerge anytime if the rains continue in this momentum. The bridge links Virajpet and Madikeri. The low-lying areas of Karadigodu near Siddapura have been marooned as Cauvery is flowing in full spate. People living in those areas have been asked to move to safer places.

The road that connects Hysodlur to Birunani Mruthyunjaya Swamy Temple has been blocked due to landslides and the bridge connecting Halligattu and Ponnampet has is nearing a marooned state. Though the District Administration has not officially banned tourist entry in the wake of last August’s unprecedented floods and landslides that destroyed 30 percent of Madikeri and Somwarpet Districts, tourists are subtly being told to avoid stay and trek in hilly regions.

The administration has asked people to remain cautious. It is presumed that the coffee-growing region may receive up to 204 mm rain between Aug. 7 and 9.

Bhagamandala and Talacauvery have recorded heavy rains from last four days. The road connectivity to two places has been suspended with floodwaters submerging the road. Virajpet MLA K.G. Bopaiah inspected the affected areas in an inflatable boat.

The Madikeri-Bhagamandala and Napoklu-Bhagamandala Roads have been flooded. Boats have been kept ready in Bhagamandala for evacuating stranded people. The personnel of Fire Department and Home Guards have also been deployed in the area for emergency operations.

Bopaiah told reporters that Chief Minister B.S. Yediyurappa will also soon visit Kodagu to assess the rain damage. He said the CM, who had recently convened a meeting in Bengaluru with elected representatives from Kodagu to discuss the reconstruction of the district, had sanctioned Rs. 540 crore for this.

The MLA said that there is a need to build a bridge across Cauvery River at Bhagamandala and efforts will be made to complete it by next year so that traffic is not disrupted by heavy rains again. Later, the MLA visited the site where a portion of Virajpet-Makutta Road caved in and said that a bridge would be built across Kootupole rivulet by the end of this year.

In the next two or three days, the Makutta road will be thrown open to traffic even as repair work will be taken up. According to Kodagu DC Annies Kanmani Joy, the administration has deployed the personnel of Fire Department and Home Guards in the various areas for emergency operations.

“An embankment of gunny bags filled with manufactured sand would be put up on the Makutta Road soon to facilitate the vehicle movement on the stretch. A permanent restoration will be taken up soon,” said the DC. The road near Abyathmangala has been blocked as rivers are overflowing. The Hoddur-Murnad-Napoklu-Balamuri road has been cut off as River Cauvery is overflowing in many places. The Yemmethaalu Bridge near Hattihole has been blocked by trees that have been washed away from hilly regions last year and this season. Fear of landslides has gripped the residents of Hattihole, Yemmethaalu, Kaloor, Thantipaala, Madikeri, Mukkodlu, Madapura, Soorlabbi and surrounding areas. These areas were destroyed in landslides last year.

Meanwhile, the inflow to Krishnaraja Sagar (KRS) Reservoir near Srirangapatna increased at the rate of 22,719 cusecs due to rain in the catchment areas of Cauvery in Kodagu. However, according to Irrigation Department officials, the chances of KRS attaining full reservoir level this season are very bleak as Karnataka has to release a huge quantum of water to Tamil Nadu. Today’s water level at KRS stood at 86.90 feet as against the maximum level of 124.80 feet. Today’s outflow was recorded at 6,330 cusecs.