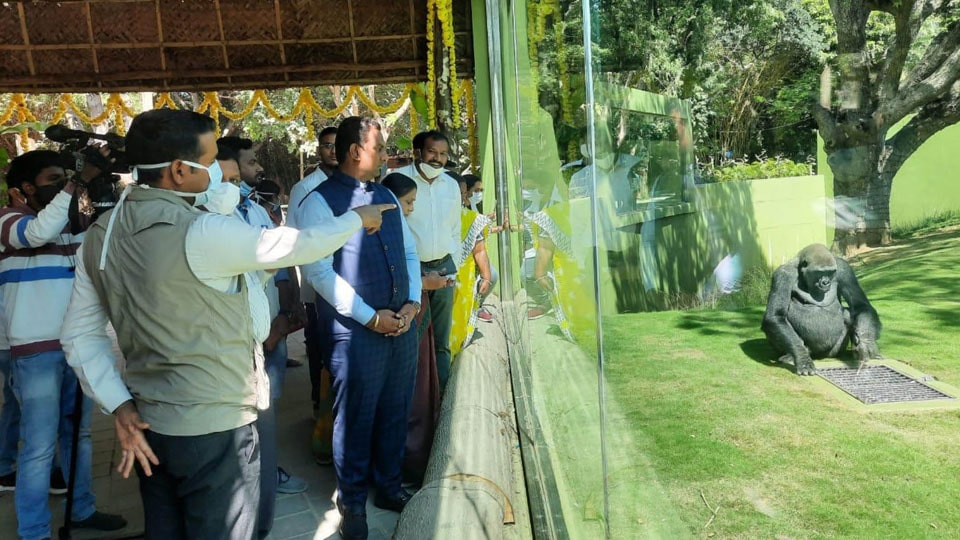 Mysore/Mysuru: Two gorillas that were brought from Germany were put on display at Mysuru Zoo yesterday and Chief Minister Basavaraj Bommai virtually inaugurated the enclosures that have been built at a cost of Rs. 2.70 crore with funding from Infosys Foundation.

The gorillas are named Thabo (14) and Demba (8) and are males and in the next step, Germany will dispatch a family group to be housed in the Mysuru Zoo. The Zoo authorities have already sent a proposal to the Infosys Foundation for an additional grant of Rs. 3.6 crore for more enclosures.

In all, the Infosys Foundation will spend about Rs. 6 crore for the enclosures. Foundation Chairperson Sudha Murty will retire this month after heading it for 25 years, from its inception in 1996.

Inaugurating the enclosures, the CM complimented Sudha Murty for her work in Mysuru, be it bringing back to life the once dead Hebbal Lake and also contributing for the animal enclosures and other projects at the Mysuru Zoo under the Corporate Social Responsibility (CSR).

Returning the compliments, Sudha Murty, who was also part of the virtual inauguration, told the CM that the Mysuru Zoo was well-maintained and is the centre of attraction for tourists. The Zoo has more than 1,400 animals of 145 different species. “Tourists are being attracted like a magnet to the Zoo and they repeatedly visit to see the animals. Also, the Zoo has turned into a second home for the animals after being in the wild,” she said.

In 1977, the Mysuru Zoo had procured two gorillas from Germany and in 1995, it had Polo, a silver-back primate from Germany. It died in 2014 and since then, the Zoo did not have any gorilla. After many years of efforts, Demba and Thabo were brought to the Zoo from Germany on Aug. 19 this year.

The Mysuru Zoo has conformed to all the rules and regulations and as such, the animals are procured. The primates were brought to Mysuru through EAZA (European Association of Zoos and Aquaria) under EEP (European Endangered Species Programme).

The Zoo has reworked the primate enclosures that houses orangutans and gorillas following suggestions by experts from across the globe where iron grills of the rooms were replaced with stainless steel with a raised enclosure height. These enclosures are natural and have been designed as per international standards to increase comfort, safety and at the same time ensure hygiene.