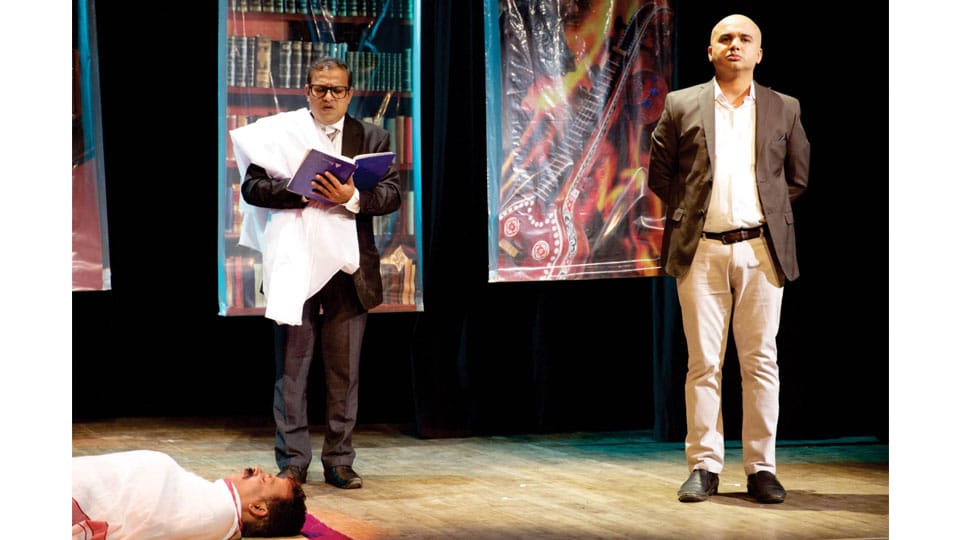 Mysore/Mysuru: Rangavalli, a city-based amateur theatre troupe, presented a double bill show at Mini Theatre in Kalamandira premises last evening which left the audience with mixed emotions in the 90- minute performance that spoke of scientific and unscientific rituals, beliefs and superstitions, serious and comical aspects.

The first half of the show featured A.K. Ramanujan’s play ‘Annayyana Manavashastra’ in which Raghavendra Bhudanuru donned the role of Annayya and beautifully portrayed the role as an NRI who wonders on how an American anthropologist studied Manusmriti (Laws of Manu) and knows everything about the Hindu rituals which he himself (Annayya) being born a Brahmin is unknown of. In the run-up, the play gave a picture of how anything held too closer is not clear while something that is at a distance attracts one’s interest.

Vishwas Krishna and Raviprasad as narrators spoke out loud the voice of Annayya’s mind and the book he read and wondered.

The second half was K.P. Poornachandra Tejaswi’s ‘Mayamruga’ which was enacted by Vishwas Krishna (as Dasappa Mestru), Manjunatha Shastry (as Shah), Raviprasad (as Chandru), Shravya (as Saraswathi) and Manju Mangala (as ‘Mayamruga’).

The play, which begins with comedy elements and takes the audience on a laughter ride throughout with humorous dialogue delivery, makes the viewers leave the auditorium wondering all about the uninvited, unknown and unexpected— ‘the death’!

The double bill play will be re-staged at Mini Theatre in Kalamandira premises today also (Dec. 29) at 7 pm.