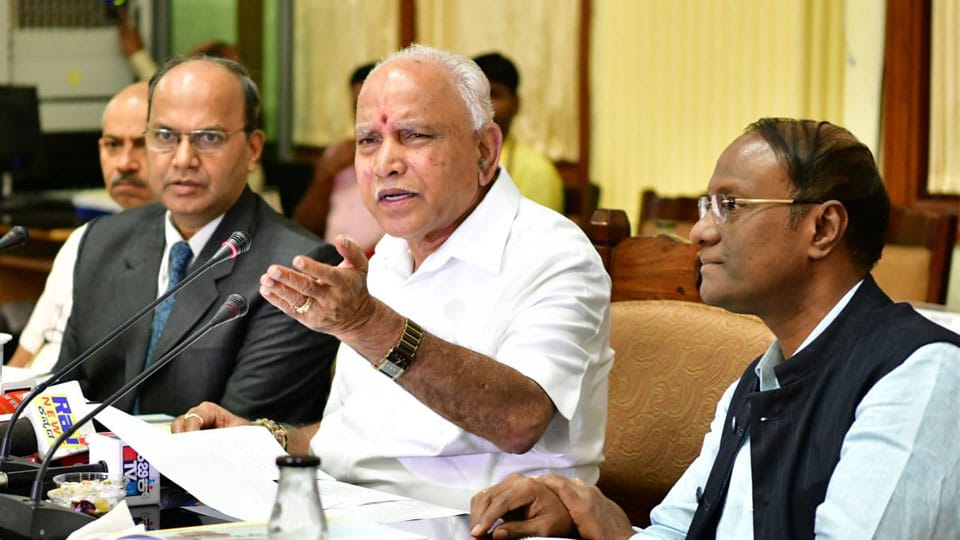 Bengaluru: Cracking the whip against lethargic officials, Chief Minister B.S. Yediyurappa has warned of action against those officials who are complacent in discharging their duties.

Yediyurappa was addressing top officials at an eight-hour marathon meeting with Regional Commissioners, Deputy Commissioners and Zilla Panchayat Chief Executive Officers (CEOs)  at Vidhana Soudha yesterday during which he reviewed the drought situation and discussed other issues.

The CM directed the officials to complete ‘App-based crop survey’ to ascertain the exact acreage under various crops during the kharif season, in 10 days.

Yediyurappa told the officials to take steps to mitigate drinking water and fodder problems and to utilise funds effectively under the MNREGA.

Later speaking to press persons, Yediyurappa said that he had ordered a comprehensive review of Anna Bhagya Scheme, a flagship welfare measure launched by the previous Congress Government to provide 7-kg of rice free to every member of a BPL household.

Maintaining that free distribution of rice to lakhs of families has increased the burden on the State exchequer, he said that there are an estimated one lakh illegal beneficiaries under the Anna Bhagya Scheme in every district and officials have been told to undertake a survey in each district to check pilferage of food grains.

Noting that many Government officials and affluent families are availing the benefits of the Rice Scheme in connivance with Fair Price Shop owners, he said the drive could eliminate such families in every district.

He warned the officials that they would be held responsible if rice was found rotting or eaten by rodents.

No leave for officials

The CM also told the officials not to take leave for the next three months in order to address the grievances of the public.

CM in New Delhi from Aug. 6

CM Yediyurappa will be in the national capital for three days from Aug. 6. Addressing the media, he said that he would discuss issues related to Cabinet expansion with top leaders of the party during his visit to New Delhi.

Pointing out that he will meet Prime Minister Narendra Modi and BJP National President Amit Shah, Yediyurappa maintained that the State Cabinet will be expanded only after consultation with top party leaders and the expansion may take place soon.