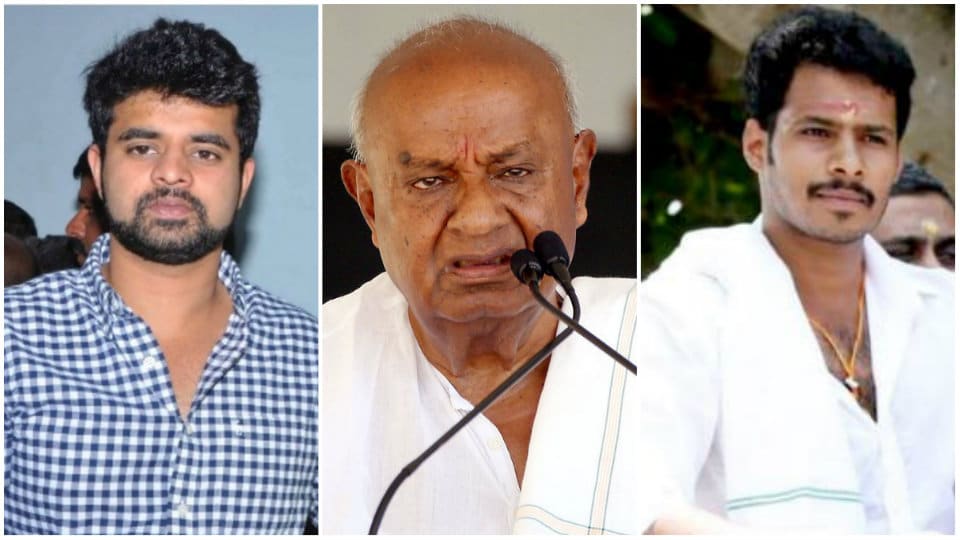 Mysuru: State JD(S) Youth Wing President Nikhil Kumaraswamy, son of former Chief Minister H.D. Kumaraswamy, is likely to be fielded as the JD(S) candidate for the KR Pet by-poll, after sitting JD(S) MLA K.C. Narayanagowda was disqualified by the then Assembly Speaker K.R. Ramesh Kumar for going against the party’s whip in the crucial vote of confidence moved by the then CM Kumaraswamy.

JD(S)  Supremo and former PM H.D. Deve Gowda is said to be seriously considering the candidature of Nikhil Kumaraswamy, who lost the Lok Sabha Polls from Mandya to independent candidate Sumalatha Ambarish.

Amidst this development, Kumaraswamy is holding a meeting with party workers at KR Pet later today, during which the issue of Nikhil’s candidature is likely to take centre stage.

Even as speculation on Nikhil’s candidature is gaining ground in KR Pet, the BJP which came to power in the State last week, is mulling on fielding Chief Minister  B.S. Yediyurappa’s son B.Y. Vijayendra as the party candidate for the by-poll.

Incidentally, Yediyurappa is a native of Bookanakere in KR Pet taluk, which he visited a day after he took over as the Chief Minister  last week. Meanwhile, the JD(S) has started preparations for the by-polls in KR Pet, Hunsur and Mahalakshmi Layout Assembly segments, which were represented by the party’s disqualified Legislators.

In another interesting development, Hassan MP Prajwal Revanna, son of former PWD Minister H.D. Revanna and the lone party MP in the Lok Sabha, is said to be interested in contesting the by-poll from Hunsur Assembly segment, after resigning as the MP.

Prajwal by resigning as MP, will pave the way for his grandfather H.D. Deve Gowda to contest the Hassan Parliamentary seat in the by-polls that will ensue, if Prajwal manages to win from Hunsur and quits as Hassan MP.

It may be mentioned here that Prajwal was a strong JD(S) contender for the Hunsur Assembly segment in the 2018 Assembly polls. But the JD(S) ultimately fielded senior leader A.H. Vishwanath from the seat, which he won. However, Vishwanath was disqualified by the then Assembly Speaker Ramesh Kumar for violation of the party whip during the Trust Vote.