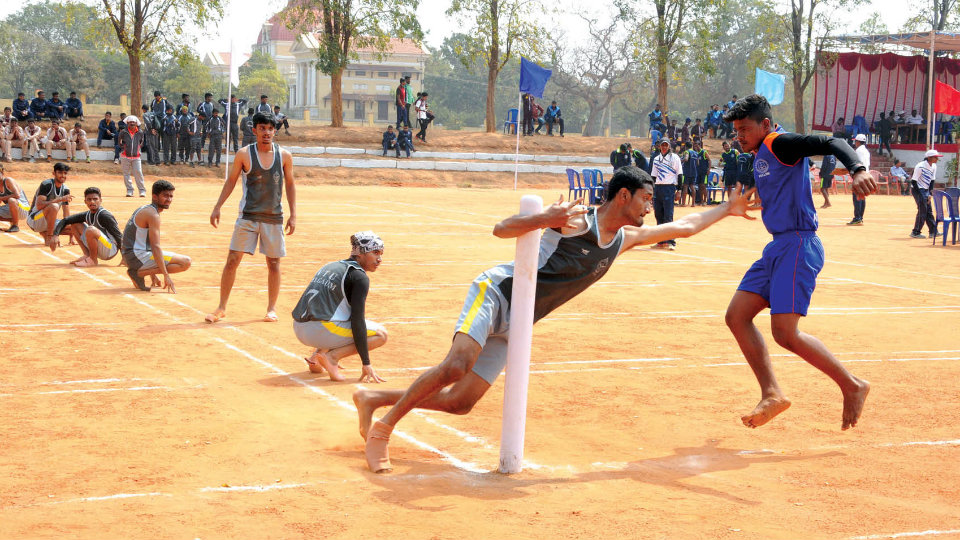 Praveen Kumar of UoM’s kho-kho team took the oath on behalf of the participants. In all, 57 teams from different Universities from South Zone will take part in the Championship. 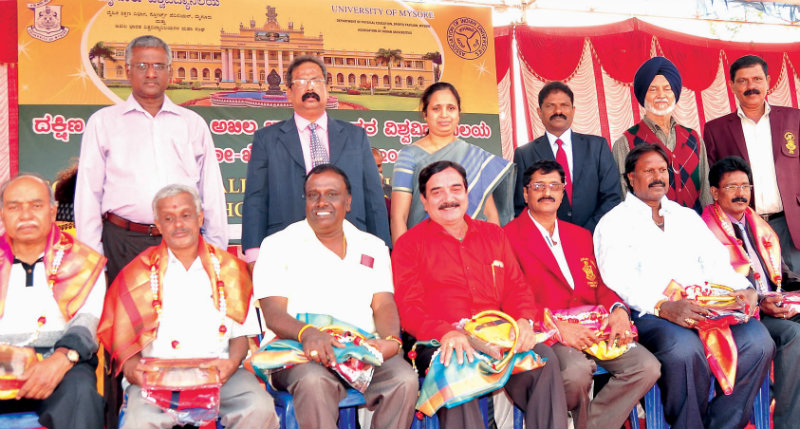 The then men’s kho-kho team of Mysore University, which won the gold medal in All India Inter-University Kho-Kho Championships held at Bengaluru in 1983-84, was felicitated by the organisers during the inaugural function of the Zone Inter-University Men’s Kho-Kho Championship 2017-18, at the University Grounds in city this morning. The team is seen with (from left) Mahadevappa, Finance Officer, UOM; Prof. C. Basavaraju, In-charge Vice-Chancellor, UoM; Bharathi, Registrar, UoM; Dr. P. Krishniah, in-Charge Director, DPE, UoM; Grewal, All India University’s Board Observer and B.D. Kantharaja, Assistant Director, DPE, UoM.

Earlier, the participating teams gave a colourful march-past and the guests took the salute and later were introduced to the teams.

Speaking on the occasion, UoM in-Charge VC Prof. C. Basavaraju, said that today is the happiest day for every sports person involved in this Championship as such tournaments brings togetherness, develops National spirit and equality among sports persons. Sports activities promotes good health of an individual and it also strengthens the society and makes them  healthier citizens.

He also wished all the participants a good tournament and said that Mysore University will be a good host and asked the sports persons to give their best during the Championship.

READ ALSO  Who will be the 25th VC of Mysore Varsity?

He also touched upon the University’s promotion of sports activities and its development. He stressed the need for providing more dormitory facilities for sports persons to stay in the University Sports Complex during the games, and assured that steps will be taken to provide the same in days to come.

Registrar Bharathi also spoke on the occasion and wished all the participants good luck.

The matches will be held on a knock-out-cum-league basis with 36 matches slated for the day (Jan.17).