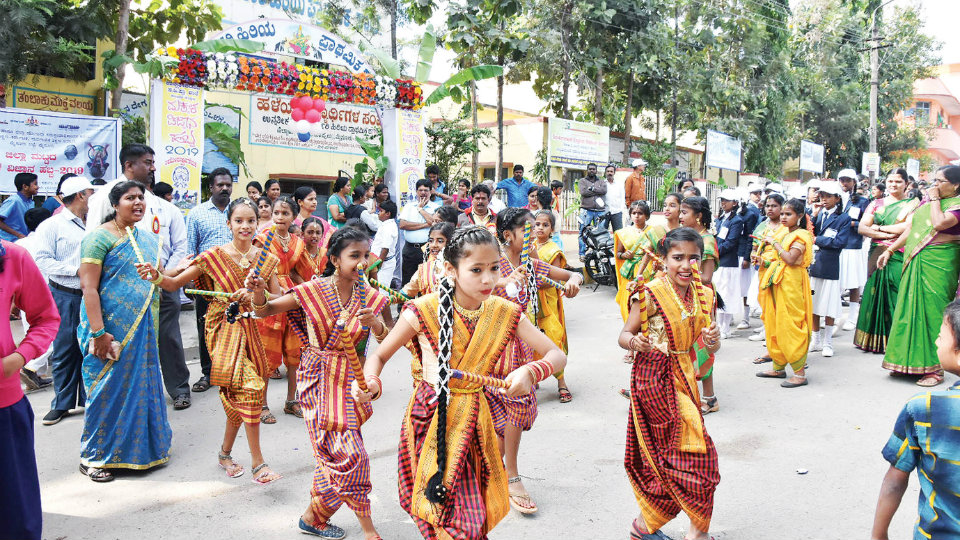 Mysuru: The three-day District-level Children’s Science Festival began this morning at Government Higher Primary School in Kumbarakoppal. More than 1,500 students from different parts of the district took out a colourful procession.

Participants were accorded a Purnakumbha welcome by locals and later, more than 1,500 students, dressed in traditional attire took out a jatha from school premises. They were accompanied by folk troupes including Puja Kunitha, Dollu Kunitha, Karaga, Kolata and Kamsale during the procession apart from bicycles, bullock carts and school music bands adding to the festive mood.

Five students from each of the 31 cluster schools in the district had been selected to participate in Science Fest.

A State-level Science Fest will be held in Srirangapatana Government Junior College from Dec. 18 to Dec. 21.

The objective of the Science Fest is to ward off superstitions, spread scientific temper among the youth and to discuss and interact with various subject experts like astronomy and related topics. A total of 10 themes have been shortlisted for the Fest. One such topic is ‘Day-time Astronomy,’ which envisions the fact that events in the sky which happen during day time give a special opportunity to ask questions ‘Why and How.’