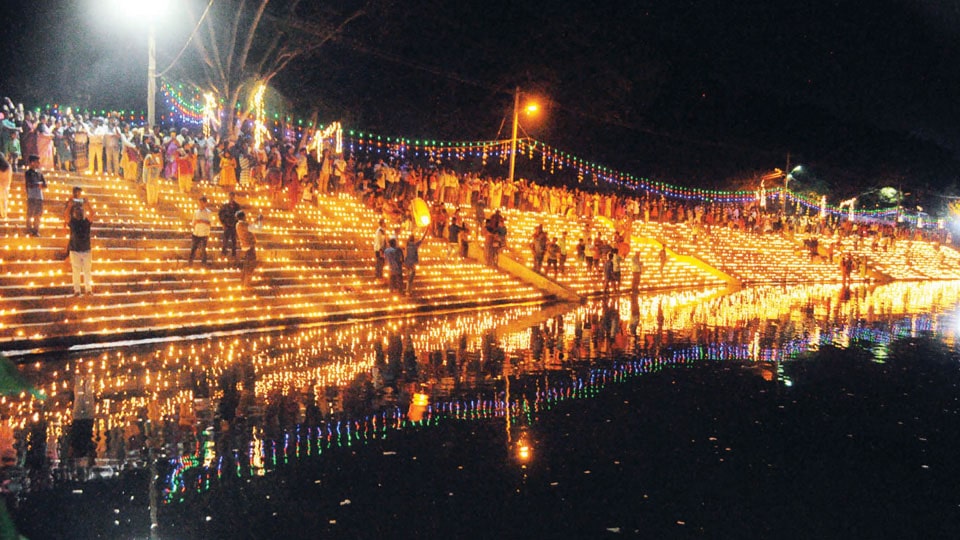 Kapila Aarti and Rathotsava in Nanjangud

Nanjangud: On the lines of the famous Ganga Aarti in Kashi, Yuva Brigade volunteers had organised Kapila Aarti on the banks of River Kapila in the temple town yesterday evening. Thousands of devotees witnessed the religious event at Nanjangud, which is known as Kashi of South India.

A festive atmosphere prevailed on the banks of River Kapila where Laksha Deepotsava had been organised. The whole stretch, which measures around 800 meters on the bathing ghat had been decorated with thousands of diyas.

Later, the priests offered Kapila Aarti, the customary offering of lighted lamps to the river, and the devout began chanting hymns in praise of the river.

More than 150 men and women simultaneously lit the lamps arranged in series on the bank steps of the river and thousands of devotees floated lighted diyas in the river, followed by bursting of crackers near the temple premises.

Later, 108 women in traditional attire carrying Purnakumbha circumambulated the temple amidst playing of ‘Nadaswaram’ and chanting of mantras. They performed ashtateertha abhisheka to the idol of Shivalingam followed by distribution of prasadam to devotees.

Yuva Brigade Founder Chakravarti Sulibele, S. Chandrashekhar and others were present on the occasion.

Today morning, thousands of devotees from across the State took part in the Chikka Jatra Rathotsava (car festival) at the  temple. Three rathas (Ganapathi-Chandikeshwara, Parvathi and Srikanteshwara) were taken around in a grand procession on all the main streets of the temple town. Devotees vied with each other to draw the chariots. The rituals were performed by a team of temple priests.