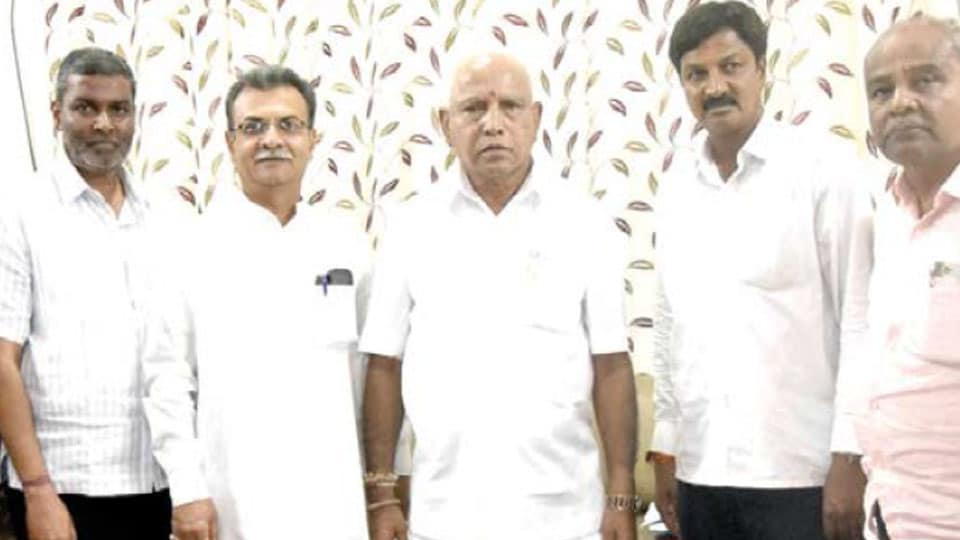 Bengaluru: Stepping up their ante, all the seventeen disqualified legislators, including 11 newly-elected MLAs who were elected on a BJP ticket in the bypolls and as well as the two defeated candidates, met Chief Minister B.S.Yediyurappa at his Dollar’s Colony residence here this morning for the second day today. Most of the newly- elected disqualified MLAs had met the CM yesterday too.

The disqualified Legislators led by Gokak MLA  Ramesh Jarkiholi had a one-to-one meeting with Yediyurappa, during which they urged the CM to include all of them in the State Cabinet as promised by the BJP before they quit their Assembly seats. They  are also said to have sought plum portfolios like Power, Water Resources, Urban Development, Transport, PWD and Medical Education, besides urging for the withdrawal of election petitions filed by the defeated BJP candidates in Maski and Rajarajeshwarinagar, according to sources.

Giving a patient hearing to them, CM Yediyurappa said that he was wholly committed to keep the promises made to them. But some of the promises are to be discussed  with the National BJP leadership, he said while asking them to contact the BJP top brass at New Delhi, for which he would facilitate an appointment soon.

Maintaining that he had planned to expand his Cabinet on Thursday (Dec.12), the CM said that he was  now doubtful if the expansion would take place tomorrow as the Party High Command is yet to give its nod.

However, he will go ahead with the expansion if he gets the green signal from Delhi this evening, he said and asked them not to feel frustrated, as plans were being worked out to accommodate all of them suitably, it is learnt.

With the Congress faring poorly in the by-polls, winning just 2 of the 15 seats, the spate of resignations of Congress leaders owning moral responsibility, has continued with AICC In-charge of Karnataka K.C.Venugopal being the latest leader to offer resignation.

He is said to have tendered his resignation to acting AICC President Sonia Gandhi, according to sources.

On Monday, hours after the bypoll results were out, CLP and Opposition leader Siddharamaiah and KPCC President Dinesh Gundurao had quit their posts. However, the Congress High Command is yet to accept their resignations.