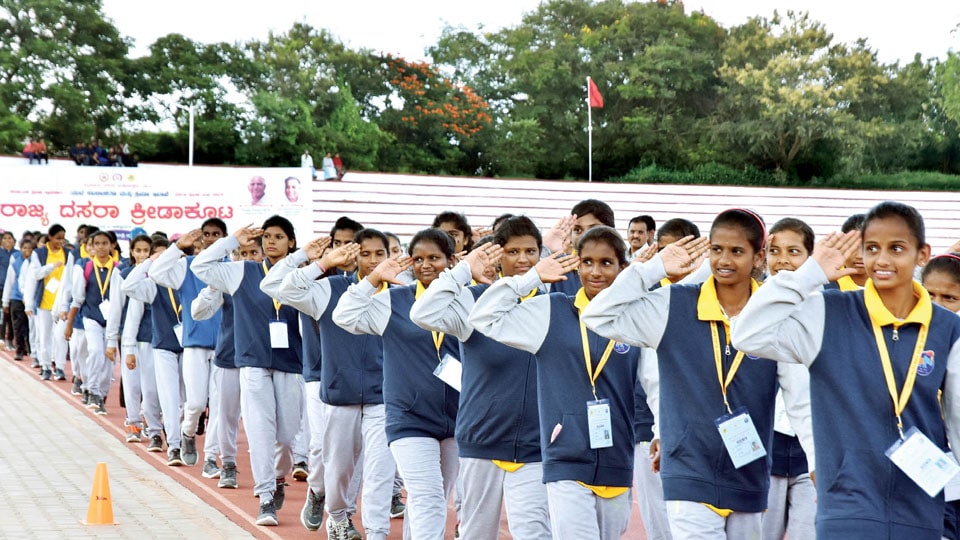 Players made to jump through hoops by the Sports Department. What could be the reason?

Mysuru: A good two months after Dasara festival is over, the winners of Dasara Sports Meet-2019 are a miffed lot as they are yet to get their prize money. This apathy and indifference of the authorities may send a wrong signal and the athletes may shy away from taking part in next Dasara events.

Dasara Sports is considered as one of the important sporting events at the State and National level. This year’s Dasara Sports conducted by the Department of Youth Empowerment and Sports was inaugurated by none other than the International Badminton Champion P.V. Sindhu on Oct.1 at Chamundi Vihar Stadium in the presence of Chief Minister B.S. Yediyurappa. The District Administration had extended all support to the Department in conducting this Meet.

The week-long sports meet (Oct.1 to 6) featured 28 indoor and outdoor games for men and women like Marathon, Cycling, Athletics, Basketball, Hockey, Football, Kabaddi, Kho-Kho and other team events. More than 12,000 players from across the country had taken part. But now scores of winners of various events are a disappointed lot as the prize money announced by the organisers has not reached them yet.

Prior to the start of ‘Nada Habba’, District Minister V. Somanna had announced that all Dasara events will be held without any shortcomings. The Minister had also announced that the winners will be given cash prizes within a specified time. But even after two months, the  prize money is not disbursed though their bank account details were taken at the time of registration.

On an average, there will be 12 to 16 players in team events (both men and women) like Volleyball, Hockey, Kho-Kho, Football, Kabaddi, Handball etc. Every member of the first prize winning team had to be paid Rs.3,000 each while the team that comes second – Rs.2,000 each and third – Rs.1,000 each.

This is the first time in the history of Dasara that payment of prize money has been delayed for such a long time. In the past, the Department of Youth Empowerment and Sports used to disburse cash prizes within fifteen days of the completion of Sports Meet. Also, there are several instances where the prize money has been given away the very next day after the conclusion of the Meet.

As per an estimate, the Department of Youth Empowerment and Sports has to pay cash prizes of upto Rs.30 lakh to winners of Dasara sports events this year.

Officials too not paid

Let alone sportspersons, even sports officials, who play a crucial role in the success of  an event, too are yet to get their remuneration/honorarium. The Sports officials, who include Umpires, Referees and the like, come from different parts of the District and State to conduct/officiate the event smoothly. Even they too are not paid their remuneration, which has put the Department of Youth Empowerment and Sports to shame.

Also, there are complaints that the sporting activities organised by the Department are not being held in a transparent manner, with some of the sports officials managing to stick on to their post in Mysuru itself for years together.  With the Department’s functioning in question, it is high time that the District Minister intervenes and takes drastic measures for overhauling the otherwise lax Department.

Disappointed over the functioning of the Sports Department, some senior sportspersons told Star of Mysore  that they would meet the District Minister shortly and submit a memorandum seeking better management of the Department.

Even as Dasara sports meet winners are clueless on when they will get their prize money, K.J. Sandhya from Ernakulam in Kerala, who won the fifth prize in Marathon for women, said that she was supposed to get a prize money of Rs.10,000.

The Officials then had told her that she will receive the prize in a week but even after two months, she is yet to get her cash prize. She and other winners have been regularly calling the Department of Youth Empowerment and Sports to enquire when they would get their prize money but the officials are giving no definite assurance on payment of cash prize, she rued.

Mysuru Hockey team captain Chetan said that he and his team members too are yet to get cash prizes as announced. Stating that his team is eagerly awaiting the cash prize, he said he came to know that the winners from other States too are yet to receive the prize money.

On behalf of all the enthusiastic participants, he urged the Sports Department authorities to immediately release the cash prize.

The District Administration should wake up at least now and take measures to ensure that the Dasara athletes get their reward at the earliest and set a good precedent.

When SOM tried to contact the Department of Youth Empowerment and Sports Assistant Director K. Suresh this morning he was not available for his reaction.