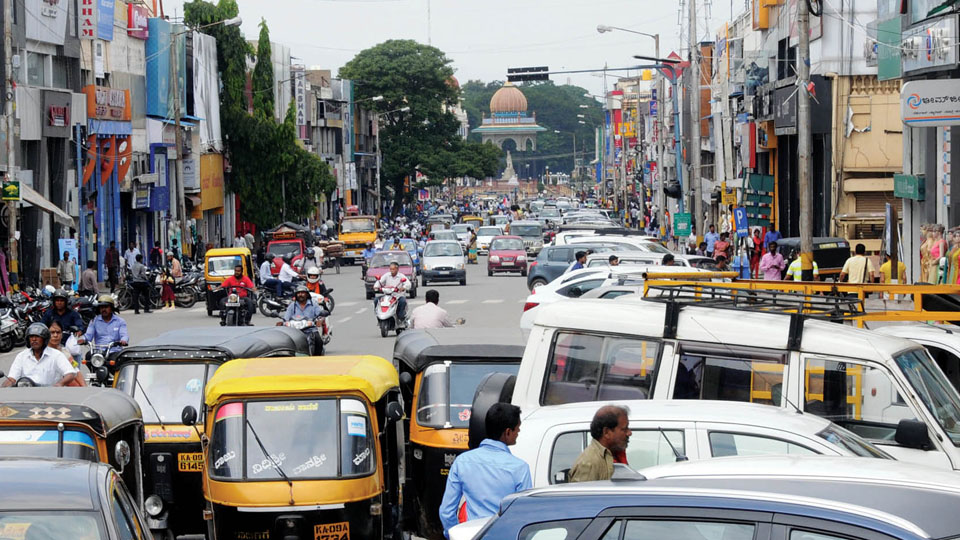 Mysureans past the age of 80 years can recollect the feature of people walking, read commuting, to reach their destinations such as the shops in the Central Business District (CBD) of the city, Offices of different Departments of the Government (their number being a fraction of what they are nowadays), schools and colleges (most of them reachable in a matter of minutes), places of worship (including Chamundeshwari temple on top of the Hill), markets to buy daily requirements of vegetables and fruits, shops to purchase clothes and jewellery, medical stores (in numbers that could be counted on one’s fingers), banks (dominated by the erstwhile Mysore Bank), City Railway Station to board trains and receive incoming kin as well as guests (hopping on to the now-gone friendly Mysore tongas), play grounds to witness sporting events), even hospital to care for the sick and last but not the least, their routine constitutional both in the mornings and evenings. The above scenario, which earned the remark about Mysore as a city of residents with a laid-back outlook, is not even a talking point in our times.

Mysore of yesteryears hosting bicycles whose number was well below 300, automobiles whose number was in two digits and only a couple of buses for providing public transport that didn’t find favour with typical Mysureans, has morphed into Mysuru hosting a population on the cusp of 15 lakh where commuting over even short distances is motorised. Walking is only for exercise marked by people reaching public parks on two-wheelers and cars.

Poet Samuel Taylor Coleridge (1772-1834), who wrote in 1834 the line Water, water everywhere, Nor any drop to drink (from the poem “The Rime of the Ancient Mariner”), if he were to be in Mysuru nowadays may perhaps write ‘Cars and mobikes everywhere, but nowhere to park them.’ The day is not too far away from modifying the line to read ‘People, people everywhere, but no place to walk.’ Hundreds of people gather at bus terminals, standing in long lines, jostling with the crowds, never minding the wait for time in which they could have walked the distance, much like the rustics were doing to reach the city from nearby villages. There are no words to compare the discomfort of commuting by public transport with the comfort of walking (then) and using personal transport (now).

To prescribe walking for commuting even within city limits is sure to be laughed at, given the facility of reaching destinations by autorickshaws, taxis on call and personal transport. Lastly, the challenges of public transport are a) crowding, b) connecting the last mile, c) unfriendly to the senior citizen and the physically challenged and d) lacking in punctuality, apart from low bus penetration, reportedly at 1.4 buses per 1,000 people in India.