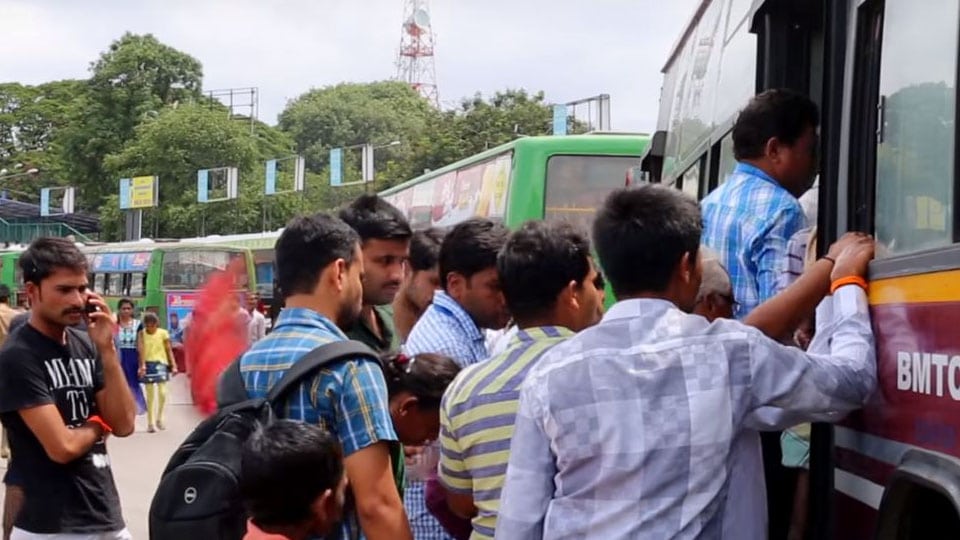 The distance between one’s residence and work station in cities, particularly those hosting residents in large numbers, has not only tended to cross walkable mode but also turned tough and expensive to cover in commuting on week days, apart from requiring hours of travel time. The term large numerically has exceeded ten million in Bengaluru and other cities hosting residents in similar numbers, while four cities have crossed twice that number. Mysuru, a highly walkable city until not too long ago, is fast moving towards a scenario of giving up walking to commute from residence to workplace and also for shopping in the city’s central business district, not to forget the feature of students reaching schools and colleges by motorised transport. Amidst the fast changing image of cities with their residents moving about in unprecedented numbers, even as in Mysuru, living and working in the same space, particularly the now-dwindling sections engaged on traditional trades such as weaving bamboo products, has resulted in a challenge to civic authorities not to take away their livelihood. The rest of the city’s workforce is left with no choice other than commuting using either their own motorised vehicles or public transport, as an alternative.

Thinking of the past virtually heavenly ambience, such as in Mysuru and living in the past are different kettles of fish. Wishing to restore that past of not more than a few decades vintage, when Mysuru hosted about one-fourth the present number of families, prompts one to recollect the idiom If wishes were horses, beggars would ride them. The proverb You can’t have the cake and eat it too also fits issue of living close to place of work.

Researchers of Bengaluru-based Institute of Social and Economic Change (ISEC) have prepared a report, as published recently in a section of the press, after interviewing 470 workers in five sectors — Government, Information Technology, Industry, Trade and Commerce and Unorganised sections — with data on commuting distances and modes of moving. Their inference that higher one’s educational qualification, longer one commutes to workplace. Further, they found that married men have a longer commute, while single men live in paying guest accommodation close to their workplace. The issue connecting qualification with distance is not limited to difficulty, read misery, for Bengaluru’s commuters in particular and their counterparts in other cities.

The consequence of urban mass of workers forced to commute long distances from their residence to respective workplace, namely hardship in life, time spent only to travel, cluttered roads, pollution of air, burning imported fuel at exorbitant cost are there for all to suffer. If there is a Nobel Prize for suggesting measures to undo these consequences, one who shows the way out richly deserves the Prize. The expression Hope springs eternal in the human breast, attributed to Poet Alexander Pope (1688-1744) serves as the bottomline.