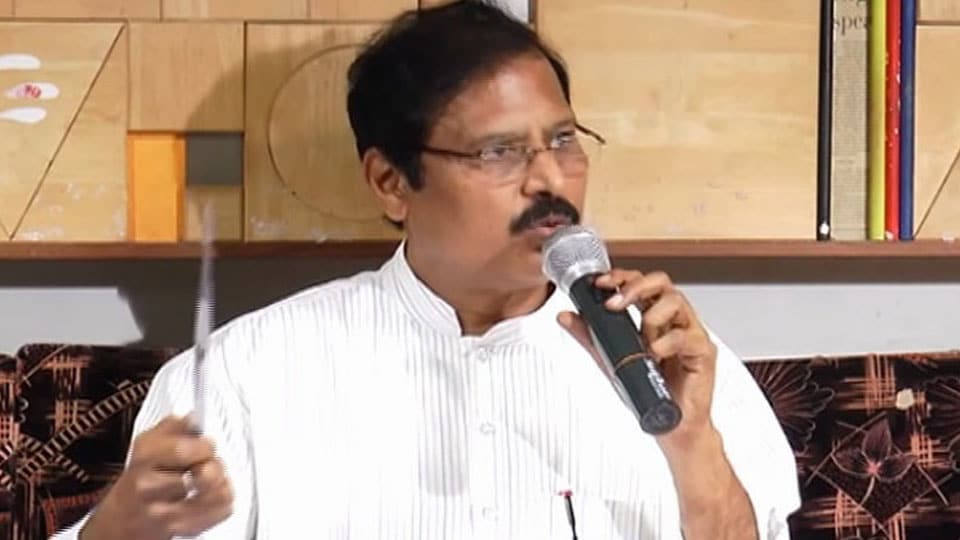 Mysuru: Former Chairman of State Legislative Council and Congress leader V.R. Sudarshan criticised the State BJP leaders for seeking votes by raking up communal issues like construction of Ram Mandir, abrogation of Article 370 and other controversial issues during this Lok Sabha polls in order to hide the failures of Narendra Modi led government at the Centre.

Addressing media conference at Patrakarthara Bhavan in city, he alleged that the Union Government led by Prime Minister Narendra Modi has risked the lives of poor by his unilateral decisions like demonetisation of Rs. 500 and Rs.1,000 currencies and implementation of Goods and Services Tax (GST) without any job creation.

The Prime Minister had rolled out both the schemes unilaterally by sidelining the opinion of experts. Common man was affected a lot by these two decisions across the nation, he said.

Accusing the NDA Government at the Centre for being more interested in closing down public sector-owned Hindustan Aeronautics Limited (HAL), he also charged that PM Modi gave the contracts of defence components manufacturing to crony capitalists. The wrong policies of the NDA government have caused lot of hardships and has weakened the Indian economy, he added.

He said that the Union Government has failed in all fronts and most of the pre-poll slogans on overall development have remained on paper. Neither OROP (One Rank, One Pension) for army personnel nor the promise of Rs. 15 lakh cash deposits to each Jan Dhan account have been fulfilled, he said.

The promise that BJP made about bringing back black money, not even a single rupee has been brought back, he said.