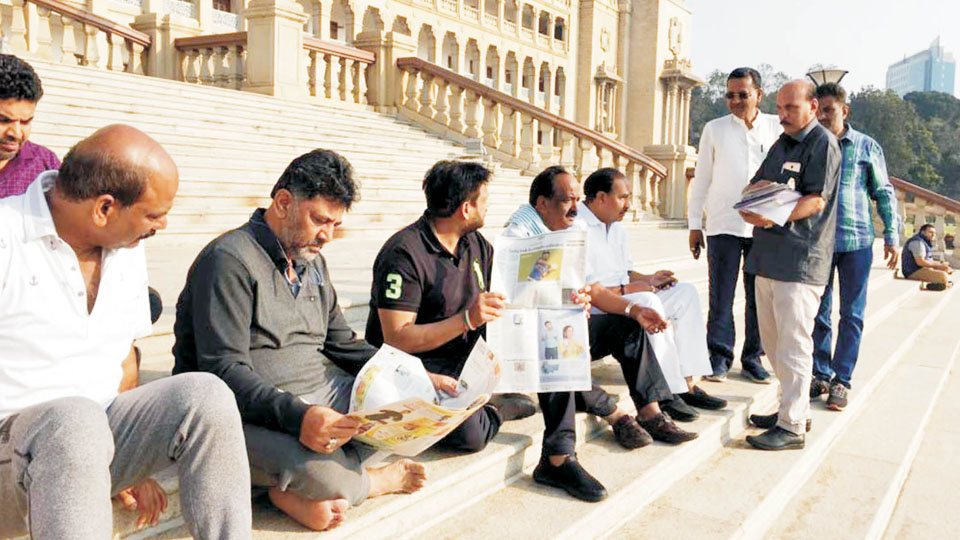 Bengaluru: The indefinite day and night stir launched by the Congress in the Assembly Council Hall here demanding sacking of RDPR Minister K.S. Eshwarappa for his reported remarks that the saffron flag would be hoisted atop New Delhi’s Red Fort, entered the third day today, with the Opposition party severely targeting Eshwarappa for his  alleged unconstitutional remarks.

Maintaining that the Govern-ment, apart from sacking Eshwarappa should book  sedition charges against him, the Congress legislators led by KPCC President D.K. Shivakumar and Opposition Leader Siddharamaiah refused to call off the dharna.

A day after Eshwarappa made the remark, the Congress has been on an indefinite dharna in Vidhana Soudha since Wednesday evening.

Meanwhile, as the Congress party’s indefinite dharna continued, Assembly Speaker Vishweshwar Hegde Kageri  this morning made efforts to convince the Congress leaders to withdraw the dharna. But his efforts seemed futile as the Congress was unrelenting on its demand for the ouster of  Eshwarappa.

On Thursday, former Chief Minister B.S. Yediyurappa  and a couple of Cabinet Ministers too tried to convince the Congress Legislators, but in vain.

Meanwhile, the Karnataka Assembly Session was adjourned to Monday amidst uproar.