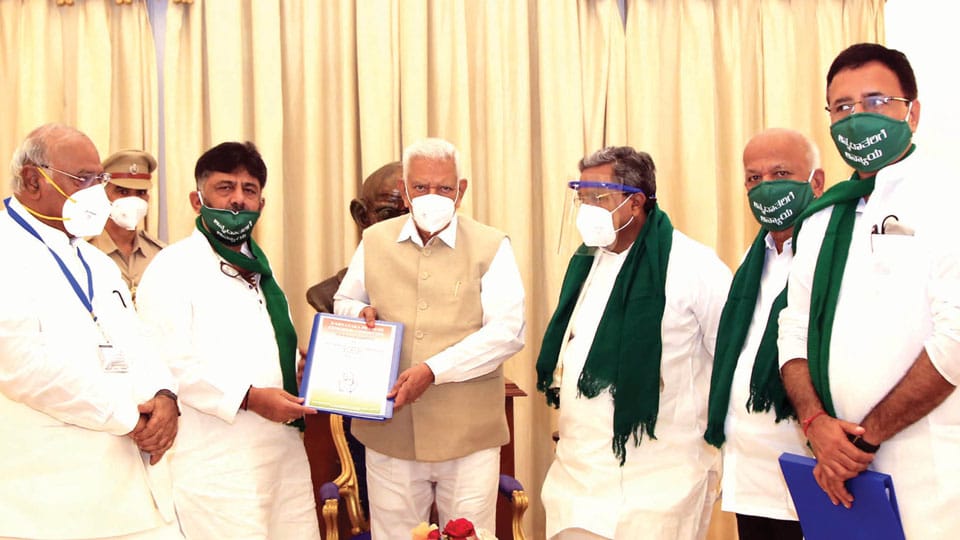 Bengaluru: Even as the Karnataka Bandh called by farmer, labour and other associations in protest against the amendments to Land Reforms, APMC and Labour Acts on Monday drew mixed response across the State, the Opposition Congress which had backed the Bandh, submitted a memorandum to Governor Vajubhai R. Vala at Raj Bhavan here yesterday urging him to reject Farm Bills and the amended Acts, which it (Congress) said were anti-farmer and anti-people.

Later speaking to press persons, KPCC President D.K. Shivakumar said that the Congress has submitted two petitions to the Governor — one against the Farm Bills introduced by the Centre and the other against the recent amendments made by the State Government to Land Reforms, APMC and Labour Acts.

The Governor should not sign the amendments and reject them outrightly as they were anti-farmer and anti-people, he said and warned that the Congress will launch a Statewide agitation if the Government does not repeal the amendments, which is being widely opposed across the State.

Shivakumar further said that the Congress will launch a signature campaign against the amendments from Oct. 10 to 30, during which the President of India will be appealed to reject the Centre’s Farm Bills. The Congress, as the Opposition party, will launch a big movement against the Bills and amendments in the coming days if they were not withdrawn, he added.

Opposition leader Siddharamaiah urged the BJP Government to dissolve the Assembly and go for fresh Assembly elections in the State. Maintaining that the BJP had not included the amendments in its election manifesto, Siddharamaiah said that Chief Minister B.S. Yediyurappa should seek dissolution of the Assembly and go for elections, seeking a fresh mandate by placing the amendments to Land Reforms, APMC and Labour Acts and the Centre’s Farm Bills before the public, if he had so much confidence that the public were supportive of the BJP Government’s moves.