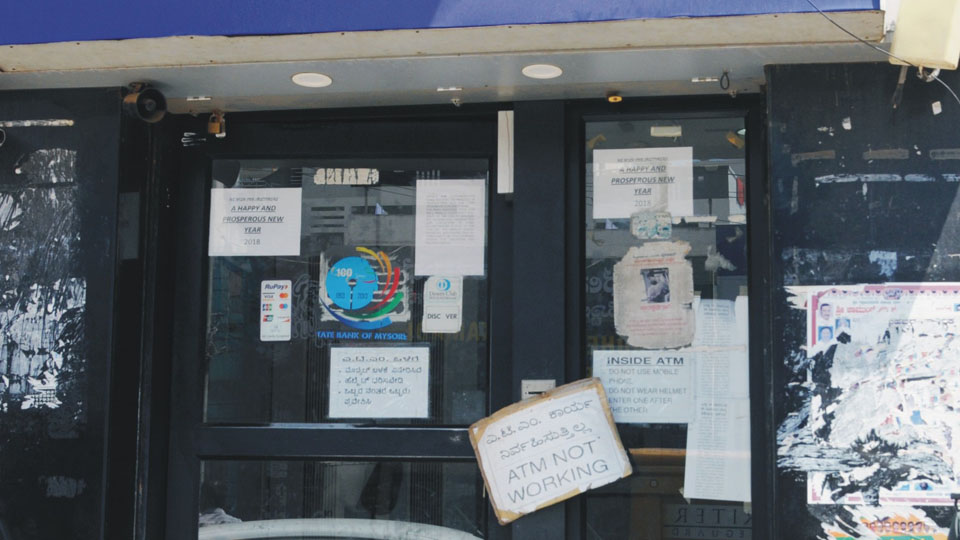 Mysuru:  Congress workers led by MLA M.K. Somashekar staged a novel protest on Monday in front of the State Bank of India ATM near Ramaswamy Circle by distributing neem leaves to the people who had come to withdraw money. The ATM was sporting the board ‘No Cash’ and the protesters shouted slogans like ‘Kendra Sarakara Diwaliyagide, idakkagi ATMgalu baridagive’ (Central Government has become a pauper, hence ATMs are dry).

Somashekar, speaking on the occasion, said that after Narendra Modi’s Government came to power in the Centre, the finances of the country are in a very precarious position.

By implementing the anti-people demonetsation and GST, the poor and the middle class have been affected. As a result, the GDP of the country has come down, he said.

As there is shortage of currency, there is also doubt regarding the printing of required cash. The cash crunch in all the ATMs in the country has put people to extreme hardship, he alleged.

The people in Mysuru are suffering because of ATMs not having cash which also affected them to celebrate Ugadi and thus it was a most bitter festival. Due to the Centre’s negligent attitude and the bitter atmosphere prevailing, neem leaves was distributed to symbolically indicate the current conditions, he said and demanded that all the ATMs be filled with sufficient cash immediately.