Home » Columns » Congress planning to lose its hold on Karnataka, too? With boldness (not National Herald) it can win 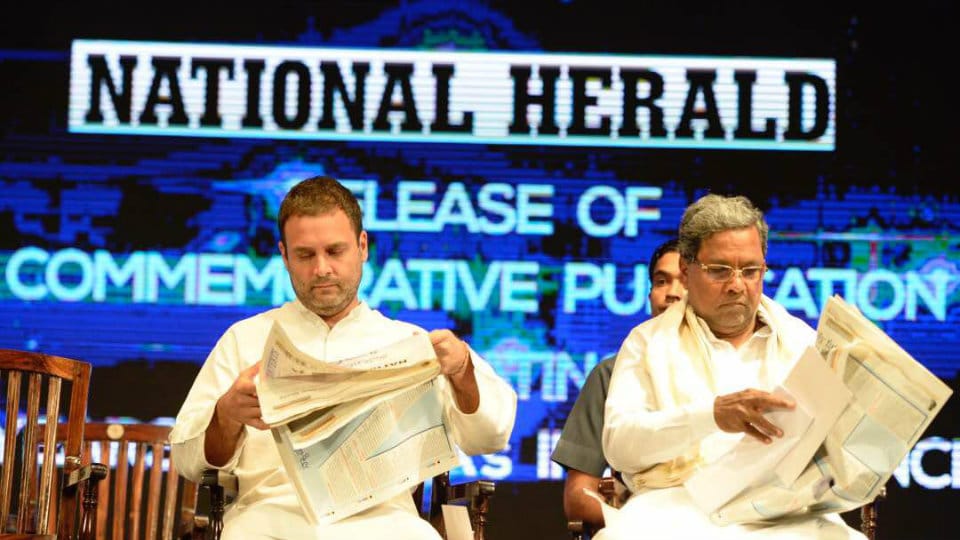 Congress planning to lose its hold on Karnataka, too? With boldness (not National Herald) it can win

Even in its glory days, the National Herald never had a South Indian presence. It was always a Delhi-Lucknow entity and knew it. It would have been another inconsequential provincial rag but for its ownership (Jawaharlal Nehru) and its editorship (Chalapathi Rau). Actually, the latter more than the former. While Nehru was an absentee overlord, it was Chalapathi’s superior qualities as editor, writer and activist that made the paper a stand-out.

The Delhi-North Indian stamp of the Herald is an unalterable historical reality. Yet, when they decided to launch a commemorative edition of the paper, they chose Bangalore as the launching pad. Strange. Why didn’t they pick Delhi where the multistorey Herald House rises proudly in the city’s newspaper street, Bahadurshah Zafar Marg? Why not Lucknow, the paper’s birthplace and headquarters? Why did they choose a location never associated with the Herald in any way?

The reason of course is that the Congress was playing practical politics. Today’s Delhi is unfriendly territory for a Nehru-linked institution. Lucknow would be even more unfriendly with a saffron-clad yogi reigning as the monarch of all he surveys there. Karnataka is a major State where the Congress is unchallenged in power. To hold a launch function there would not only be safe; it would ensure the attendance of government leaders and thus the attention of the entire State administration. That was what happened. The National Herald and Rahul Gandhi were praised skyhigh with the entire State Cabinet turning out and the Police closing major highways to make it an easy ride for the Congress.

In all fairness, it must be acknowledged that Rahul Gandhi, the star of the show, made a good impression with his speech. Someone had obviously provided timely input, for the Congress scion said that “the power of truth is being completely replaced by the truth of power.” He even quoted Yevgeny Yevtushenko, the legendary Soviet era poet, to remind us that “when truth is replaced by silence, the silence is a lie.” Very true. But when the British tried to replace truth with silence, another Gandhi responded with action that found a million tongues.

What does the present Gandhi do? He quoted Yevtushenko, then flew to Delhi and then went off to Italy to spend time, we were told, with his 93-year old grandmother. A sycophant added insult to injury by saying that “attending to aged grandparents is part of Indian culture.” Rahul Gandhi is known for his regular disappearances from India. But this was a critical moment, with strategies being worked out for the Presidential election, a gathering of opposition leaders taking place and the farmers’ agitation in the Hindi heartland growing worse by the day. Rahul chose to ignore all that and become part of  Indian culture instead.

That the Congress is in the hands of a part-time leader is the biggest asset of the BJP. Unable to come up with initiatives that enthuse the people, the Congress goes after ideas that confuse them — like the National Herald commemoration in Bengaluru. What was its purpose? Certainly not to revive the paper which is an impossibility. Was it then a move to give a boost to the Congress in Karnataka in preparation for the election next year?

READ ALSO  We need to get our India back

That is going to be a life-and-death election for the Congress. But a gimmick built round a newspaper,  that is unknown in Karnataka, is no way to prepare for so crucial an election. A bold Congress can still fight and win. The key word is bold. It must be bold enough to realise that the incumbency factor alone will lead to its collapse if the present leadership structure continues. A new face and a new promise, on the other hand, can certainly give it a fighting chance.

The Congress can electrify the scene in its favour if it projects Mallikarjun Kharge as its Chief Ministerial candidate in the next election. He is the only leader in Karnataka with a clean image and his administrative experience is unrivalled. He is also the only Congressman tall enough to keep in check the criminal elements that occupy important positions in the party leadership today. Indeed, Kharge appears to be the only option open to the Congress to keep at least one State under its flag in the South.

The question is less whether Kharge can be persuadedto take up the task and more whether the Congress leadership has the ability to understand its plight.  The alternative is to go the National Herald way.