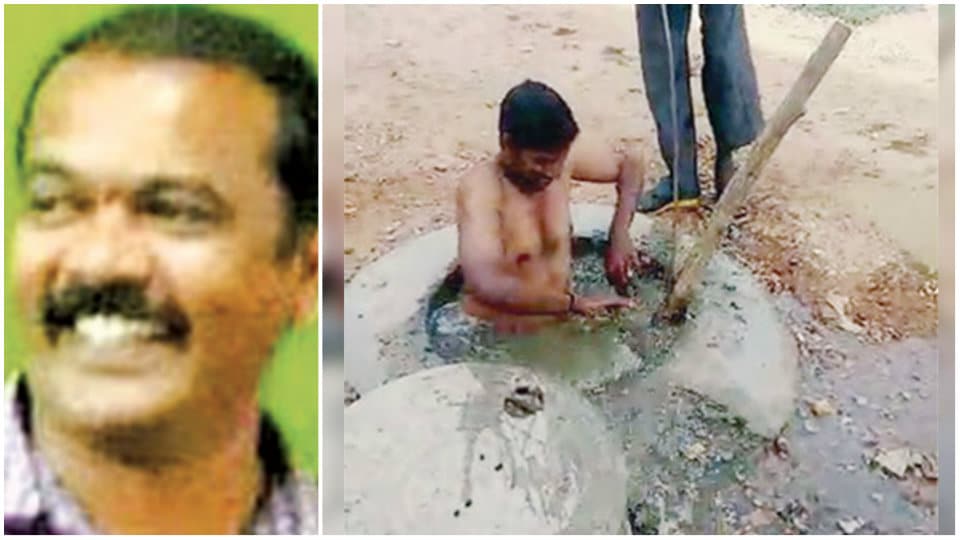 Mysuru: Police are questioning Chamundi Hill Gram Panchayat Development Officer (PDO) Anand, who is accused of forcing a civic worker to get into a manhole to clean it. Sources said that  Anand was brought by the K.R. Police from Bengaluru on Sunday (June 18).

On June 7, President of Chamundi Hill Gram Panchayat Geetha and PDO Anand allegedly forced a civic worker to climb down a manhole that was full with sewage instead of using machines to clean it. They asked Pourakarmika Ganesh to get inside the overflowing manhole in front of Geetha’s house at Thavarekere village.

Photos and videos of Ganesh getting into the manhole were circulated widely in the media. After the incident, the State Government suspended Anand and issued a show-cause notice to Geetha. Anand was reportedly undergoing a treatment at a hospital as he had met with an accident three days before the incident.

Speaking to Star of Mysore, however, K.R. Assistant Commissioner of Police Dharmappa, who is also the Investigating Officer, said that they were interrogating Anand and this cannot be termed as an arrest.

“After cases were booked, we had served a notice on the PDO asking him to be present at the Police Station. He was present for questioning yesterday and he has been asked to be present on June 20 (today) too. If the case attracts punishment below seven years, the accused is served a notice. As per Supreme Court guidelines, arrest is usually made if the accused does not cooperate with the Police,” he said.

Meanwhile, GP President Geetha is on the run. The show-cause notice issued to her by the State Government — following Zilla Panchayat Chief Executive Officer P. Shivashankar writing to the State recommending action against her — was pasted on the wall of her house.

The notice was issued on June 16 and Geetha is supposed to reply to it within a week following which the Government will decide on her Presidentship and Panchayat Membership.

Chamundi Hill Gram Panchayat Manual scavenging
Yogi of Yogis Sri Paramahansa Yogananda who had visited our city
Congress planning to lose its hold on Karnataka, too? With boldness (not National Herald) it can win