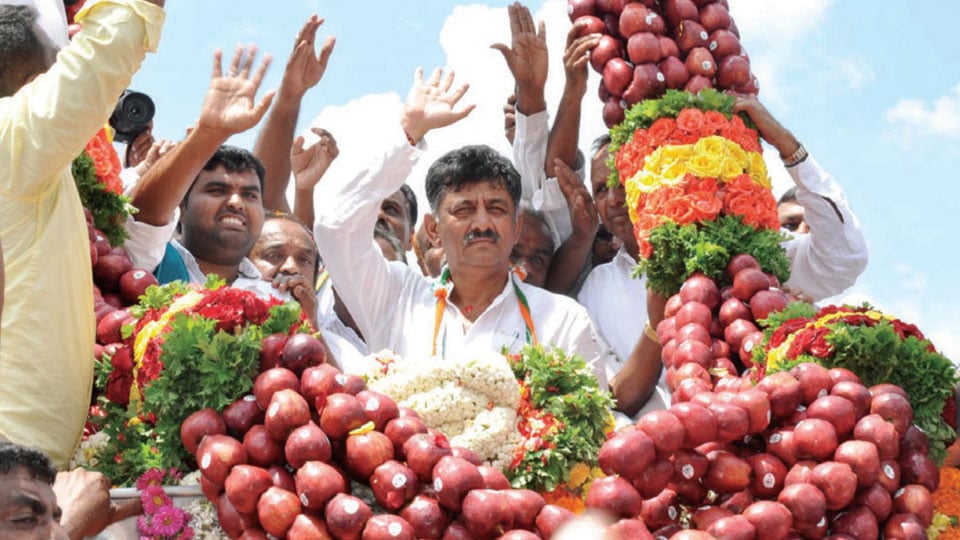 Mandya: The adage ‘An apple a day keeps the doctor away’ was taken so seriously by a supporter of Power Minister D.K. Shivakumar (DKS) that a weighty 300-kg apple garland greeted him when he visited Mandya yesterday.

In an attempt to please his boss and as an ‘act of admiration’, Srirangapatna constituency ticket aspirant Indavalu Sachidananda went to the extent of showering a garland of apples on the Minister using a crane.

DKS, who is also the State Election Campaign Committee Chief, visited the town to quell rebellion in the party.

How could Shivakumar bear the weight of the heavy garland?

Even as the crane tried to put the garland around his neck, the strings of the apples broke, and immediately there was a mad rush as people fell over one another to grab the apples.

The apple garland cost close to Rs.1.60 lakh, it is said.

It may be recalled, just last week, during former Chief Minister H.D. Kumaraswamy’s visit to Mandya, Ravindra Srikantaiah’s supporters had showered him with rose petals with the help of a crane.

In order to outdo their opponents, D.K. Shivakumar’s supporters came up with the idea of an apple garland which had almost 2,500 apples, said the party insiders.