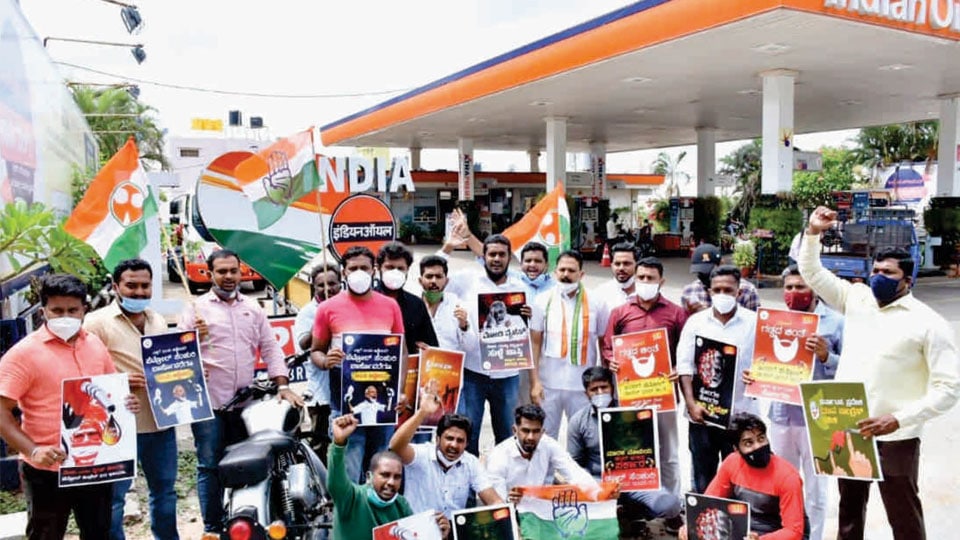 Mysore/Mysuru: Members and office-bearers of City, Rural, Youth and Women Congress units, staged protests at multiple venues in city this morning against high fuel prices which has crossed Rs. 100 per litre.

Naveen Kumar said that over the last five months, the prices of petrol and diesel had been increased 43 times despite the international crude oil price hovering around 72 dollars per barrel as compared to 110 dollars during the UPA regime when the petrol price was around Rs. 80.

Claiming that the Central Government has incurred revenue of about Rs. 3 lakh crore though taxes on petroleum products, Naveen demanded the fuel prices be slashed as it was affecting the common man, who is already reeling under severe financial crisis following COVID-19-induced lockdown.

Mahila Congress: The City Mahila Congress unit led by its President and former Mayor Pushpalatha T.B. Chikkanna, staged a protest near a petrol bunk on Dhanvantri Road and condemned the hike in fuel prices.

Vice-President and former Deputy Mayor Pushpavalli and others were present.

In other protests, former MLAs Vasu, M.K. Somashekar and Kalale Keshavamurthy former MP and KPCC Working President R. Dhruvanarayan, Hunsur MLA H.P. Manjunath, Congress Legal Cell and RTI unit State Secretary Kavitha Kaale and others staged a protest in front a petrol bunk and at the Congress Office near City Railway Station and condemned the frequently increasing fuel prices. The highlight was ‘100 not out’ placards, denoting the hike in per litre of petrol.