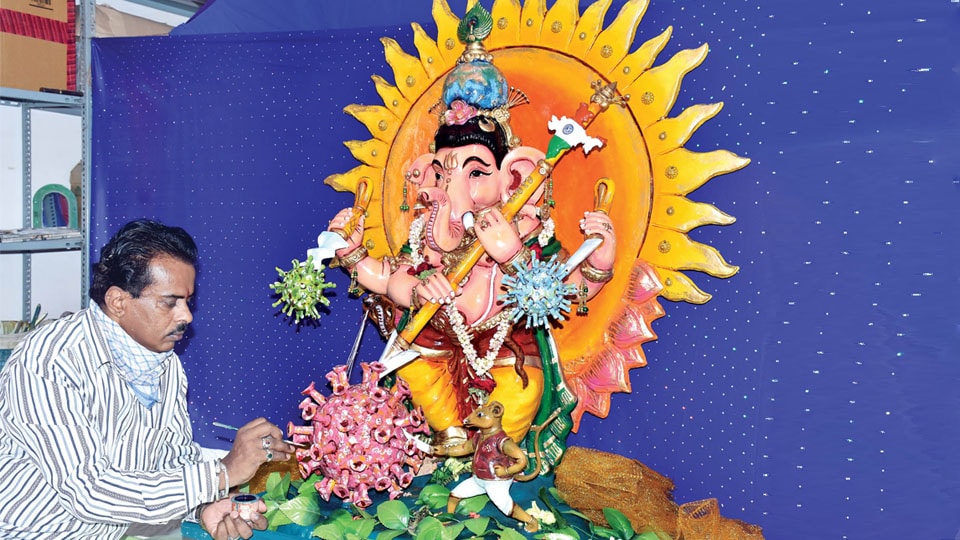 City-based artist D. Revanna, who is known for coming up with unique creative Ganesha statues based on current events during Ganesh Chaturthi every year, has come up with a special Ganesha statue depicting Corona-Mardhaka Ganesha idol this year.

The idol — 4 ft tall and weighing 15 kgs — is seen destroying the virus at the bottom of his feet with a potent weapon. As if to assist its master, Mooshika (Ganesha’s vehicle) too is holding a sword and has been portrayed piercing the virus with his sword.

The weapon used to destroy the virus has the map of India carved on it and the idol is themed as if India (represented by Ganesha) is destroying the virus. Ganesha also holds two more weapons that have the virus at their tips indicating that the Lord is waging an all out war to destroy the virus from the Indian soil.

Revanna has come up with this special fibre Ganesha statue in 20 days to express solidarity with people across the globe and Corona warriors to create awareness on the virus and also mainly to pray Lord Ganesha to eliminate the virus and for the good health and wellbeing of the mankind.

He spent Rs. 20,000 on the idol and prepared it at his secret room where he works on statues. He kept the idol a secret even from his own family members. Once the statue was prepared, he surprised his family members who later helped him paint the statue.

Revanna is a resident of Kumbarageri and he has graduated with Bachelor of Fine Arts in Painting and Sculpture from noted CAVA (Chamarajendra Government College of Visual Arts) of Mysuru. He is known for coming up with over 500 eco-friendly Ganesha statues from 5 inch to 5 feet height using clay and natural colours.