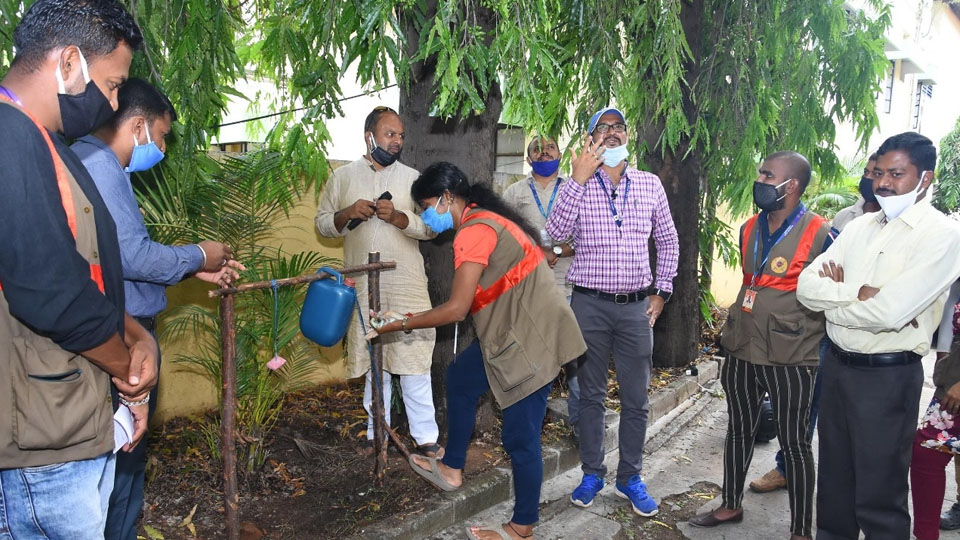 Corona volunteers demonstrate use of Tippy Tap to wash hands

Mysore/Mysuru: In a bid to create awareness on the importance of washing hands to prevent the spread of Coronavirus (COVID-19), the volunteers serving as Corona Warriors demonstrated the use of Tippy Tap to wash hands without touching the tap.

Tippy Tap is a hands-free device for hand washing that is especially designed for rural areas where there is no running water. It is operated by a foot lever and thus reduces the chance for the transmission of pathogens as the user only touches a bar of soap suspended by a string.

Adequate hand washing with the Tippy Tap requires very less water as compared to using a cup or mug. Additionally, used gray water can be recycled for watering plants. Tippy Tap can be made with locally-sourced materials at virtually no cost.

Following the announcement of the lockdown, Corona Warriors teams consisting of 70 members with 15 persons in one team were formed by the Department of Information and Public Relations and the Labour Department to create awareness on the precautions to be taken. These teams have been moving around in the district including city and rural places conducting awareness programmes since two months.

Yesterday, the Corona Warriors team demonstrated the use of Tippy Tap to wash hands to prevent the use of public taps at the Department of Information and Public Relations premises near Dasappa Circle-Dhanvanthri Road Junction.

The basic set of required materials includes several sticks, string, soap and a container for the water. Two sticks of 4 ft. in height are installed to the ground about 4 ft. apart and another stick in tied horizontally to the two sticks to resemble one side on a box.

The volunteers said that these Tippy Taps could be placed near schools and colleges, public places and the people could wash their hands without touching the tap or the plastic can and the used water could be used to water plants.