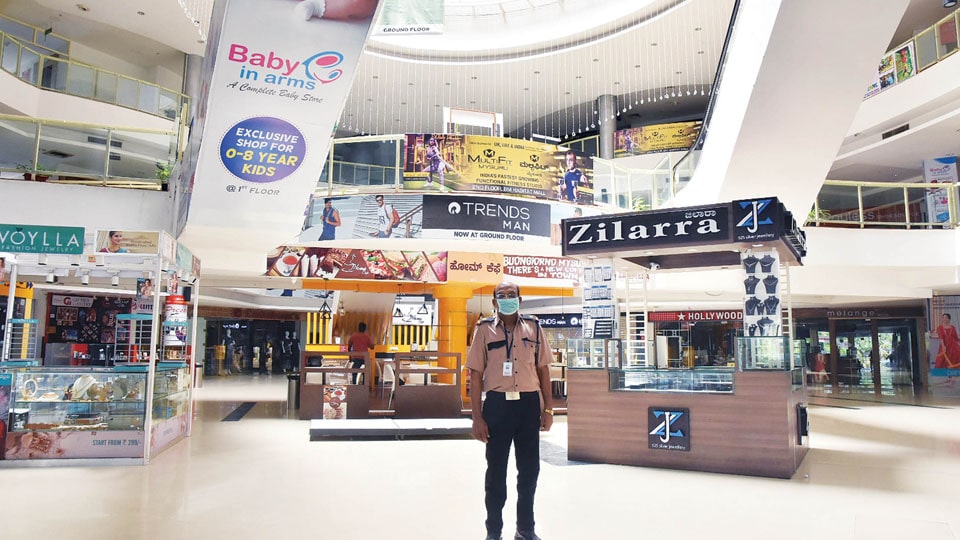 Mysore/Mysuru: As the State Government went into a battle mode to arrest the march of Novel Coronavirus, the city went into a lock-down mode with popular weekend spots like malls, cinemas and swimming pools remaining out of bounds for public this morning.

This scene will prevail till a week as the popular hang-outs are unlikely to bring in the crowds following most families staying at homes in the wake of Karnataka Government’s slew of precautionary measures where large gatherings including weddings and sporting events have been banned. All kinds of exhibitions, summer camps, conferences, events and birthday parties have also been banned.

Meanwhile, with the second death of a 68-year-old woman in New Delhi and with 85 positive cases of COVID-19, India too has launched a containment lock-down with several States closing schools, colleges and theatres and cancelling public events.

All malls in Mysuru like the Forum City Centre, Mall of Mysore, BM Habitat Mall and Garuda Mall and amusement parks like the GRS Fantasy Park and Snow Park were closed and ‘No Show’ boards were displayed in front of theatres and multiplexes. While people moved around in private vehicles and public transport, there were no large gatherings including in places like Mysore Palace, Zoo, Krishna Raja Sagar, Ranganathittu, Chamundi Hill and other places of tourist interest.

Following the week-long shutdown of all Government and private programmes, many residents preferred to stay at home as they were not ready to take the risk. Today is Saturday and a holiday season and all the tourist centres in city would be bustling with visitors. Even hotels and restaurants reported thin attendance. While malls remained shut, shopping complexes and supermarkets were open as usual but with less people. People managing the counters were seen wearing masks and using sanitisers frequently.

However, despite the government order, many private schools were open in city this morning and at a few schools, parents argued with the managements and principals for conducting classes in spite of the lockdown order. Working parents had to struggle to shift the children back homes from the schools.

While marriages and events that have been planned for today and tomorrow are being held as it is not possible to cancel the events, choultry and marriage hall owners are calling up people to cancel their events that are planned from Monday. There are over 200 choultries in Mysuru district and 150 of them have planned events.

Following the Government’s sudden closure order, the goods transport mechanism has been hit. Trucks transporting fruits, vegetables, milk and curds have not been able to carry goods from markets to individual shops.

There are over 150 student hostels run by Backward Classes and Minority Department, Social Welfare Department, University of Mysore, charity organisations and religious mutts. Students who do not have examinations (SSLC and PUC) have been asked to go home for a week or until further notice. Existing students have been given individual rooms instead of four to five students clubbed in a single room.

As there were few people in the bus stands, the KSRTC had to cancel many trips to tourist destinations. There are 448 city buses plying in 425 routes doing 4,600 trips. Today, buses plying to the IT hub in Hebbal, Chamundi Hill, Nanjangud, KRS and Srirangapatna were either cancelled or regulated with fewer trips, said KSRTC City Division DC M.N. Satish Kumar. Even other city buses reported fewer passengers in almost all routes as people preferred to stay indoors.

In the sub-urban sector, there are 701 buses and 4,500 trips operating in 670 trips. Here too, several routes have been cancelled or minimised including buses to Kerala, Chennai, Hyderabad and Tirupati. “Volvo service drivers and other drivers and conductors have been given masks and sanitisers as a precaution,” said R. Ashok Kumar, Rural KSRTC DC.