Home » News » COVID gone, flex-banners back with a bang in city 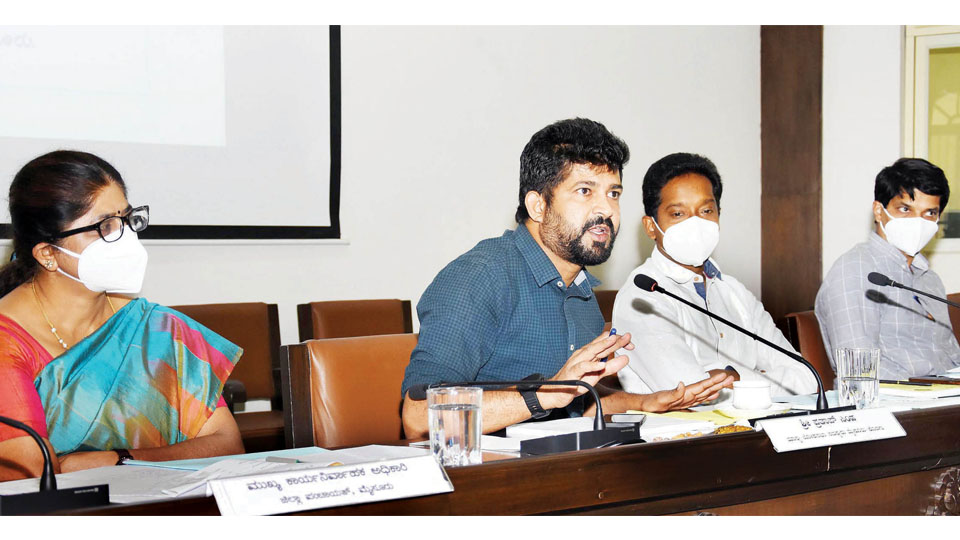 COVID gone, flex-banners back with a bang in city

Take action even on BJP leaders if they have violated rules: Pratap Simha

Mysore/Mysuru: The District Development Coordination and Monitoring Committee (DISHA) meeting held at the Zilla Panchayat Hall under the chairmanship of Mysuru-Kodagu MP Pratap Simha discussed the issue of flex and banners all over Mysuru city and district, especially by political party leaders and their supporters.

Directing the official machinery not to spare anyone if they have violated rules, the MP asked them to book BJP leaders and workers first in case they have disfigured the public places. “Initiate action against people, organisations, and political parties if they deface public places by displaying flex and banners. Issue notices to the BJP first, if they have violated norms,” he directed.

After a gap of over two years, flex and banners are back with a bang in the city and also in the areas surrounding the city. The COVID pandemic that began in 2020 had applied brakes on this industry and now with the third wave petering out, flex and banners are being witnessed at almost every nook and corner.

While the MCC should crackdown in its jurisdiction, the District Administration should ensure that the outskirts are flex-free, the MP said.

Come festivals, birthdays of politicians and local leaders or conventions by political parties, groups and communities, Mysuru is completely overrun by flexes and banners in every nook and corner of the city or a particular area. These flexes unanimously take over the city including trees, electricity poles, road dividers, medians, and even pedestrian tracks.

Big, colourful cut-outs of politicians and their kin, glorifying their birthdays or putting up huge posters to welcome leaders on any occasion, are common. Colourful flex boards are seen fluttering around everywhere on a regular basis, at prime areas like traffic signals and over the medians on the busy highways. Such larger than life-size cut-outs and banners divert the attention of motorists, causing accidents.

Though the MCC receives numerous complaints on city defacement, the civic body has not taken any action in this regard. Under The Karnataka Open Places (Prevention of Disfigurement) Act 1981 and The Karnataka Municipalities Act 1964, a person can be sent to six-month imprisonment and a fine of Rs. 1,000 can be levied, he noted.

Lakshmikantha Reddy said they have issued notices to a few persons in this connection but this has not discouraged them from continuing with the practice.

Directing the District Health Officer Dr. K.H. Prasad to ensure that all the oxygen generation plants are maintained in a fully-functional mode at all times, the MP said that of the 17 sanctioned plants, 15 were functioning and two were in the process of being set up. Zilla Panchayat Chief Executive Officer B.R. Poornima and other officials were present.

Officials pulled up for asking bribes from the poor

The MP directed officials to handover the houses constructed for migrant families at Ekalavya Nagar under NURM scheme by March 15. Unauthorised people are residing in the houses and thus they should be vacated immediately, he said.

Of the 1,070 constructed houses, only 580 were handed over to beneficiaries. Beneficiaries have been identified for the remaining houses and they will be distributed soon, said an officer. Intervening, the MP said that certain officers were demanding bribes from the beneficiaries for allotment of houses.

“Such officials should be ashamed. There are many middlemen and the officials are encouraging them. Are you not ashamed of asking bribes from poor people who have been given houses by the Government,” he asked.