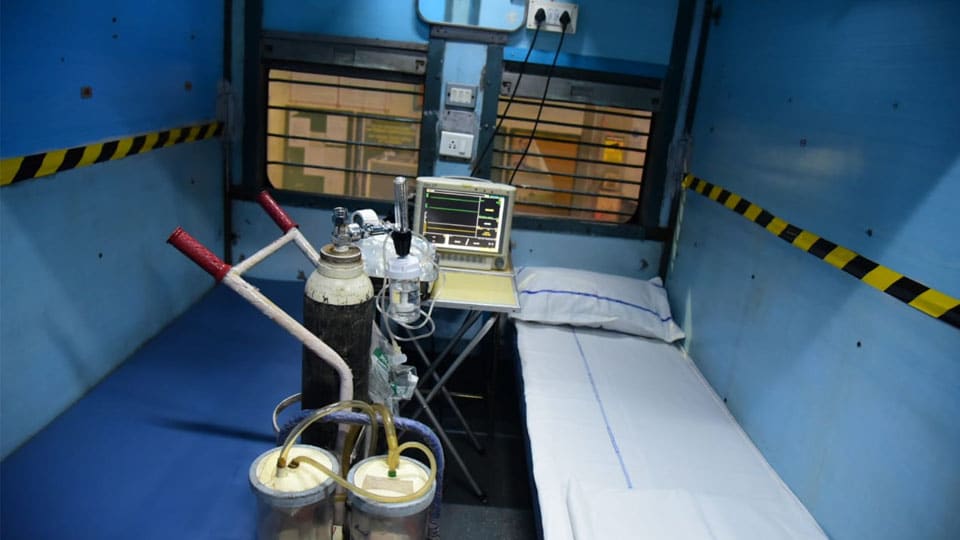 Mysore/Mysuru: Over 128 isolation coaches which the South Western Railway (SWR) readied to treat COVID-19 patients soon after the contagion struck would be modified as New Modified Goods (NMG) rakes to transport freight.

The coaches were lying idle till now at eight stations across the Mysuru Division — Mysuru, Shivamogga, Hassan, Arasikere, Nanjangud, Birur, and Chamarajanagar. Over 11 such coaches were idling in Ashokapuram Station.

Of the 128 coaches, 32 were modified at the station workshop while the others at  Ashokapuram Railway Workshop. Rs. 35,000 per bogie was spent on modifying the regular train coaches that were over 18-years-old into isolation coaches by removing the middle berth. Washroom with western commode, dustbin, window mesh, proper ventilation, space for oxygen cylinders and transparent partitions were provided in these isolation coaches to treat 7-8 patients per bogie.

This apart, special arrangement was made for medical and para-medical staff and emergency treatment. When the pandemic was at its peak in March last year, the Ministry of Railways had announced that over 20,000 passenger bogies would be converted into isolation coaches.

Following this, each railway zone was given a specific target and the South Western Railway had a target of converting 312 bogies into isolation coaches of which 128 were converted in the Mysuru Division.

Only non-AC coaches were converted into isolation coaches by removing the middle berth. Now that there is a decline in the number of positive cases and there is a high rate of recovery, there is no desperate need of these coaches as foreseen in March last year.

Even when the pandemic was at its peak, these coaches were not put to use and were just a stand-by as it was difficult to appoint medical and para-medical staff to treat the patients in these isolation coaches. The coaches remained unutilised as asymptomatic and mild to moderate patients were allowed for home isolation and symptomatic patients were accommodated at COVID Care Centres, hostels and hotels.

Also, the State Government didn’t show any interest in utilising these coaches. “We will not allow the coaches to go waste and will use them to haul freight traffic to carry motor vehicles including bikes, scooters and cars,” Railway officials said. These isolation coaches will be reconverted into New Modified Goods Coaches by removing seats and berths to carry vehicles.