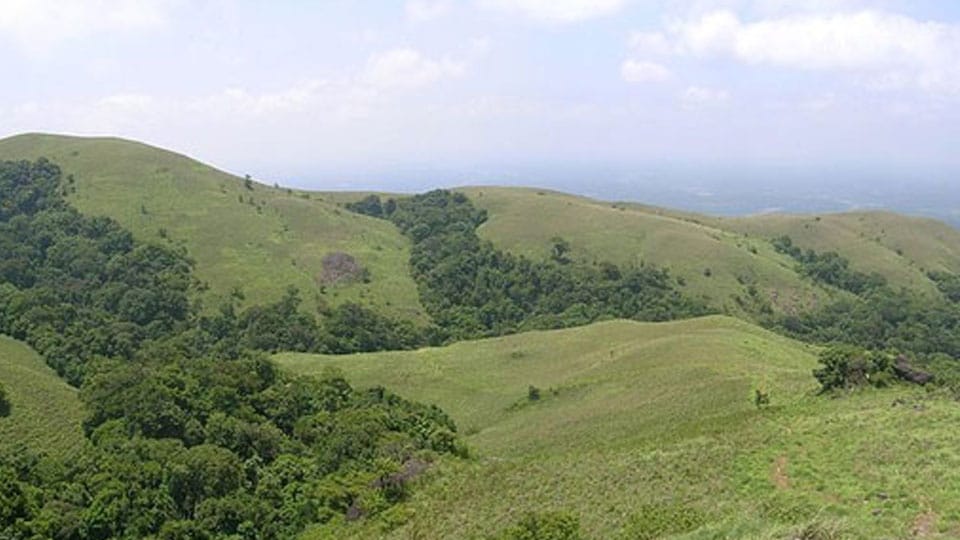 Madikeri: In the wake of deep cracks surfacing on Brahmagiri Hill at Bhagamandala, a place of mythological importance and birth-place of River Cauvery in Kodagu, officials from Geological Survey of India (GSI) have recommended certain remedial measures to be taken immediately.

Following this, Kodagu Deputy Commissioner Annies Kanmani Joy has ordered the Forest Department to close of ‘Ingu Gundi’ atop the Hill ranges. ‘Ingu Gundi’ is where household water (not sewage) is collected in small pits next to the houses for recharging groundwater. The DC has also ordered to close the cracks with cement and cover them with sand bags so that rainwater is prevented from entering the cracks, causing further damage.

The cracks have extended from the Talacauvery ‘Kundike’ (place of holy water) to the top of the Brahmagiri Hill, sending fear among the residents of Bhagamandala and Talacauvery. Following the cracks, the GSI scientists visited various spots and conducted a detailed study. Precautionary measures that need to be taken at these places will be submitted to the Kodagu DC.

Caving in of roads on Bhagamandala-Talacauvery Road is a common scene during rainy season. The sides of the road developed cracks and incessant rains this year have worsened the situation, causing the hill to crack at various places.

Heavy rains in  next two days

Meanwhile, the Meteorological Department has predicted heavy rains in Kodagu in the next two days. This forecast has caused concern among residents living in hilly areas who are just picking up threads of life following the torrential rains since the last fortnight.

At a coffee estate in Madenadu, a massive trench has been discovered where coffee and areca trees have been buried under the rubble. The deep hole has been discovered in the estate of Pattada Lobaiah. Apart from Ayyappa Swamy Betta in Virajpet, cracks have also been observed at Nangala Hill near Bittangala and there are over 40 residents living in the vicinity. One house in this area has already collapsed.