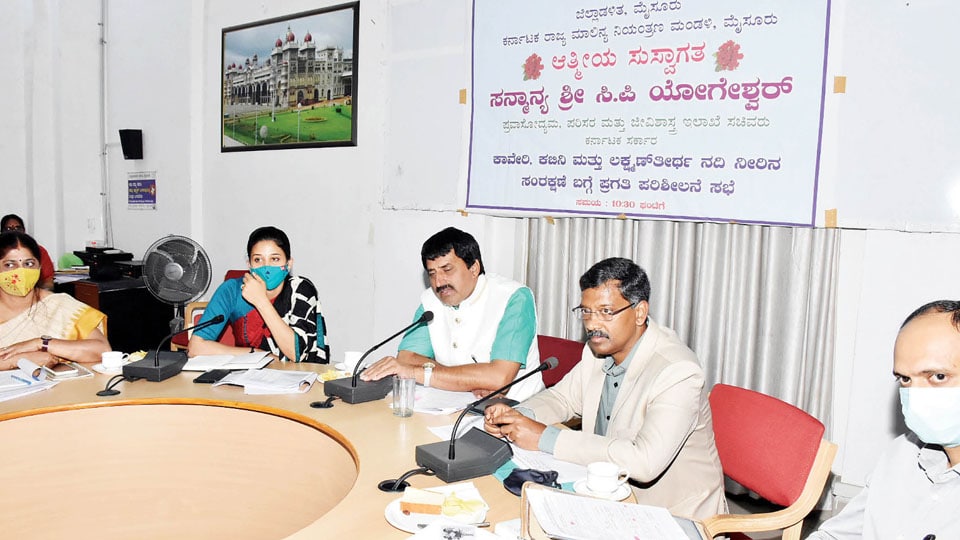 Mysore/Mysuru: Minister for Ecology and Environment C.P. Yogeeshwar today asserted that untreated sewage of cities, Town Municipal Corporations and Panchayats will not be let into rivers and strict action will be taken against local bodies, individuals and factories responsible for allowing polluted water into rivers. He said major sources of pollution in the rivers were municipal sewage and industrial effluents and warned officials of action if they fail to check the inflow of untreated sewage water into rivers.

Chairing the progress review meeting on ‘Cauvery, Kabini and Lakshmanatheertha river water conservation’ at the Deputy Commissioner’s Office in city this morning, the Minister directed the officials of Karnataka State Pollution Control Board (KSPCB) to book criminal cases against negligent officials who fail to prevent sewage flow into rivers. “Even the Courts are serious on this issue and there is a six-month jail term and a fine for polluting rivers,” he said.

“You must suggest ways to ensure supply of clean potable water and control sewerage and other toxic water flow to save rivers and other natural resources. Sampling points set up by the Pollution Control Board in Cauvery, Kabini and Lakshmanatheertha at various points show that the water quality has deteriorated due to discharge of untreated/partial treated sewage and industrial effluents,” Minister C.P. Yogeeshwar said.

Officials from Mysuru, Mandya and Chamarajanagar districts informed the Minister about problems in networking and dearth of funds to establish Sewage Treatment Plant (STPs) at some places.

Replying, KSPCB Member-Secretary Srinivasulu told officials not to wait for networking issues to be solved and asked them to utilise all existing STPs to treat sewage water. “You are concentrating only on land filling with sewage. This will pollute ground water and would cause serious problems,” he said.

Srinivasulu told the officials to take steps to convert 60 percent of sewage into manure, recycle 25 percent and use the rest for land filling. “A few private companies have come forward to collect waste and maintain cleanliness. Encourage such companies,” he added.

Minister Yogeeshwar said, “Our river water should be clean. Action would be taken against officials, who allow sewage water to flow into rivers.” Deputy Commissioner Rohini Sindhuri, officials from KSPCB, Karnataka Urban Water Supply and Drainage Board and others participated in the meeting.