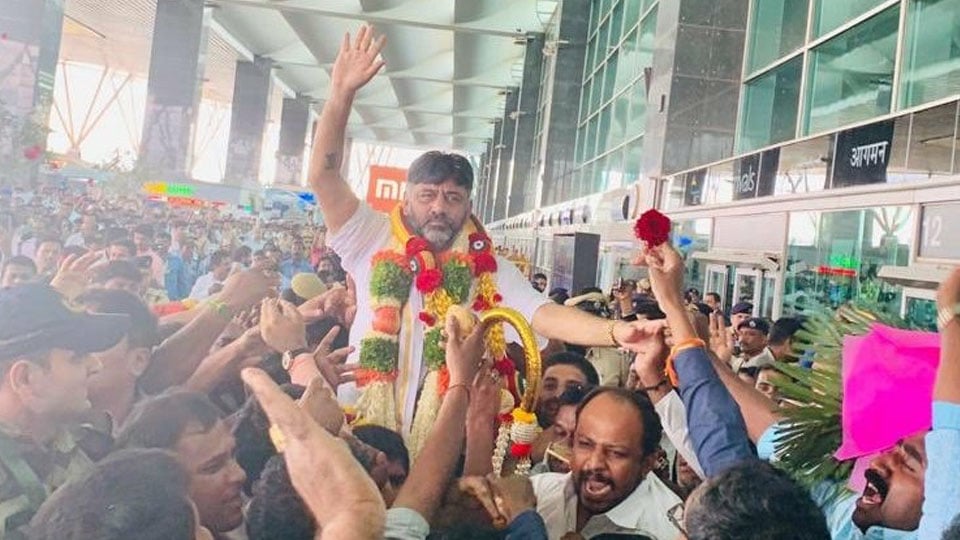 To arrive in city at 1 pm tomorrow

Mysuru:   Former Minister and senior Congress leader D.K.Shivakumar , who was released from Tihar Jail about a fortnight ago, will make his first visit to the city tomorrow (Nov.7) after his release.

Shivakumar was arrested by the Enforcement Directorate (ED)  in connection with a money laundering case in the first week of September and was released  from Delhi’s Tihar Jail after a Delhi Court granted him bail on Oct.23.

Shivakumar will arrive from Bengaluru in Shatabdi Express at 1pm and Congress workers will accord him a grand welcome at the City Railway Station, according to City Congress General Secretary Eshwar Chakkadi.

After a brief stay, Shivakumar will leave for Nanjangud at 4pm and offer prayers at Srikanteshwara Temple in the town.

He will return to Mysuru at 5pm  and visit Suttur Mutt to seek the blessings of Suttur Seer Sri Shivarathri Deshikendra Swamiji and take part in the rituals, following which he will stay for the night in city.

On Nov. 8, Shivakumar will visit Chamundi Hill Temple at 8am and offer prayers to the deity. He will return from the Hill at 9.30 am and leave for Srirangapatna where he will visit Sri Ranganathaswamy Temple, Nimishamba Temple at Ganjam and Tipu Summer Palace.

Thereafter he will leave for Mandya and offer prayers at Kalikamba Temple at 12 noon following which he will travel to Maddur and offer special prayers at Madduramma Temple.

Later on, the senior Congress leader will travel to Channapatna from where he will travel further and visit the residence of Ramesh, a personal assistant of former Deputy CM Dr.G. Parameshwar, who committed suicide last month, following which he will travel to Bengaluru.