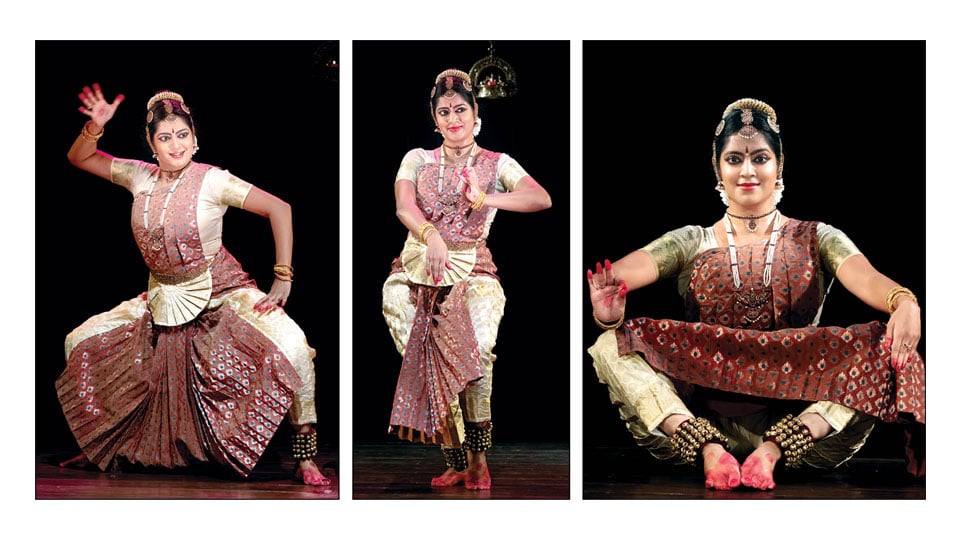 Mysore/Mysuru: Acclaimed Bharatanatyam artiste from Kodagu Mukkatira Shilpa Nanjappa has recently completed her two-year fellowship research with the Central Government’s Ministry of Culture. She was awarded the prestigious Fellowship by the Indian Government’s Centre for Cultural Resources and Training (CCRT) for 2019-2021.

Her topic was ‘Adaptation of Kodava language/literary compositions into the classical format and Bharatanatyam’. Shilpa pursued this work with the intention of popularising and propagating the language of Kodavas ‘Kodava Thakk’ which is deemed to vanish by the turn of the century.

The Fellowship is awarded to only 200 artistes across India and includes all art fields like dance, music, sculpture, literature, photography, video-graphics, etc. The CCRT is one of the premier institutions working in the field of linking education with culture.

Speaking to Star of Mysore, Shilpa said that she has submitted her 150-page thesis as part of the Fellowship. Mentioning about her research work, Shilpa said that there are many poems and prose in Kodava language and her intention was to make them accessible to the masses.

“I am proficient in the vocabulary of Bharatnatyam, Kannada, Kodava and English and I also understand the nuances of the Kodava language and as such it helped me to achieve proficiency in the Fellowship and also bring out a full length Bharatanatyam production titled ‘Tales in Kodava’.

Shilpa is the first from the community to adapt the language to dance in such a format, making it entertaining, catchy and enabling people to ponder and reflect on their present situation. Her research work and dance production makes Kodava poems effective, making people visualise and also raise questions to make their own lives better.

In fact, Shilpa did a 45-minute solo dance drama composition for Doordarshan when she was just 14 and it was about ‘Yayati’ by Haradasa Appacha Kavi. She has created a set of classical connoisseurs through her performances in Bengaluru. “I have developed the storylines, concept, content and context using Kodava poems and literature for a wider reach and appeal. All are in classical music as classicism ensures that a language lives and thrives,” she said.

The research work and the dance production come after years of research on this subject. The ‘Tales in Kodavas, the fragrance of Kodagu’s culture, its people, psyche and language through Bharatanatyam’ premiered on Sept. 2 in the online festival ‘Padmini’ brought out by Rasabodhi Arts Foundation.

Daughter of Allaranda Kamy and Uthappa, she is married to Mukkatira Pavan Nanjappa and lives in Madikeri with her family.

The dance production brings to the fore the fragrance of Kodagu’s culture, people, psyche and language through various dances choreographed and conceptualised by Shilpa.

There are five compositions in the production and the first one is by late Mandira Jaya Appanna’s musical poem ‘Jaya Mohini Bhasmasura’ episode of Lord Aiyappa that follows the legend of Makki Sarthavu Temple at Bethu village in Kodagu. The second poem ‘Conversations with Shiva’ has been written by Shilpa herself and it brings forward the no-fuss spiritual journey that the Kodavas have.

The  third poem is by late Nadikeriyanda Chinnappa in 1917 titled ‘Sri Moola Kanniye Pommale Kodumale…’ adapted to the current problems of environmental pollution, family discords and extensive exploitation of nature and how Cauvery caused landslides and floods where mountains came crashing. Called the ‘Plight of Cauvery’ Shilpa compares river Cauvery, ravaged by man-made exploitation to a woman who has been violated by a greedy society and how she hits back with a vengeance.

The fourth poem in the dance production is a poem by an anonymous poet about betrayal, love and friendship. The last one is a ‘Thillana’ in Kodava language. It is a dance of joy, exuberance with Puthari (harvest festival) as the theme, again penned and composed by Shilpa.

‘Tales in Kodava’ is available for viewing until Sept. 20 and tickets can be bought at https://www.tikkl.com/RasaBodhiArtsFoundation.