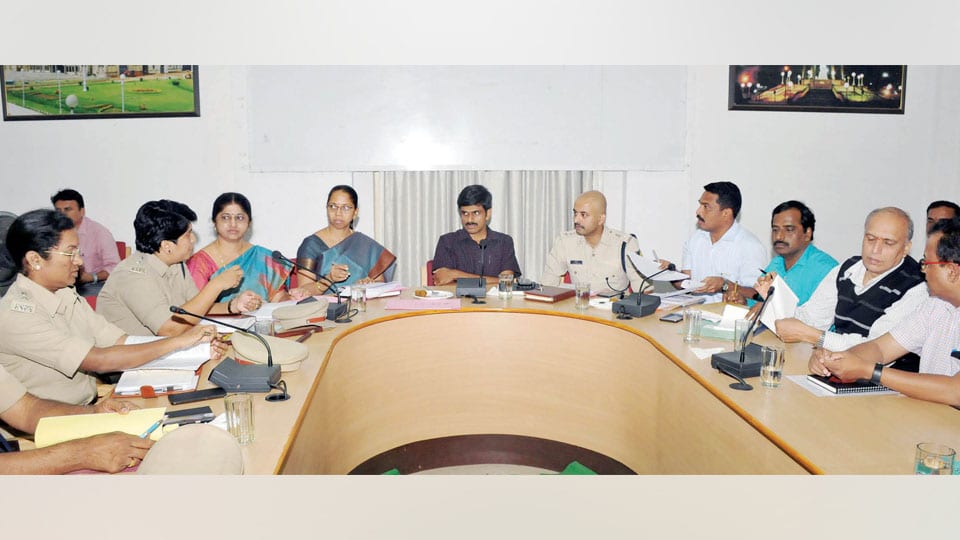 Mysuru: Finally, the District Administration has started preparations for this year’s Dasara celebrations which will be held between Sept. 29 and Oct. 8 (Jumboo Savari).

Earlier, the preparations for Dasara would commence at least four months in advance to finalise on the events, artistes, the chief guest to inaugurate the festival and also select an eminent artiste for the State Sangeetha Vidwan Award.

Recently, Mysuru Deputy Commissioner Abhiram G. Sankar, after attending the DCs and CEOs meeting in Bengaluru, had met Chief Minister B.S. Yediyurappa seeking his appointment to call for Dasara High Power Committee Meeting. Following this, the CM has convened a meeting on Aug. 9 in Bengaluru.

In view of this, the DC held a preliminary meeting with district officials yesterday to discuss various issues related to Dasara. He instructed the officials to start works on maintaining cleanliness and also put an end to use of plastic in city.

Meanwhile, the Forest Department officials have begun the process of identifying the elephants that would take part in the Jumboo Savari.

DC Abhiram Sankar also held a meeting at his Office to discuss the 73rd Independence Day celebrations to be held on Aug. 15. Instructing the officials to start preparing for I-Day events, he said that National Tri-Colour must be hoisted at all Government Offices in the district.

With the Flag hoisting to be held at the Torchlight Parade Grounds in Bannimantap at 9 am on Aug. 15, the Police Department has been instructed to provide necessary security. The officials have also been instructed to prepare for the parade  while the MCC Revenue officials have been entrusted the job of identifying freedom fighters who have not been felicitated by the District Administration till date.

READ ALSO  I-Day: Ex-servicemen to be felicitated on Aug. 20

Meanwhile, the Department of Public Instruction has  been instructed to bring students to the venue for the celebrations.

MCC has been asked to erect pendals, decorate the venue and the main stage while Mysuru Dairy personnel have been instructed to make arrangements to distribute about 4,000 sweets on the occasion. The Department of Kannada Culture will organise cultural programmes at Kalamandira in the evening to mark the occasion.