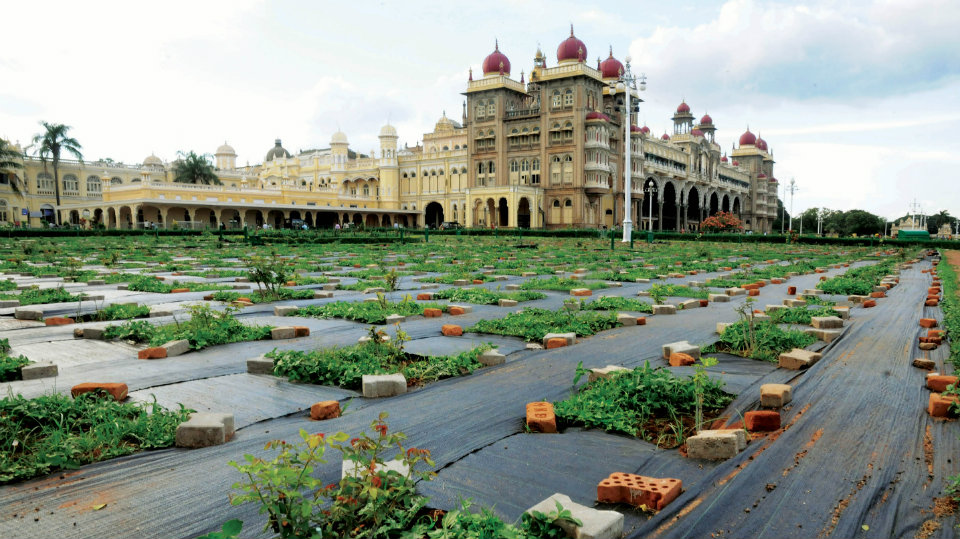 With just a couple of days to go for Dasara celebrations, the District Horticultural Society and Department of Horticulture have made all preparations to attract visitors by displaying special ornamental flowers, exotic species of rare plants at department-monitored parks and public places besides showcasing special flower arrangements at the annual Dasara Flower Show. Get on to a flowery journey with this Weekend Star Supplement.

Ornamental and flower plants have been cultivated at various horticulture nurseries for display. The Department has planted flower seedlings in over 80,000 pots of 40 varieties. The plants are being nurtured at Kuppanna Park, Government Guest House, Horticulture Department Central Office, Dasara Exhibition Grounds, Jaladarshini Guest House, Lalitha Mahal Palace, Curzon Park and Gordon Park (in front of DC Office) nurseries. These flower seedlings have been planted in five sections at these locations in April/May this year to be ready for the grand show. 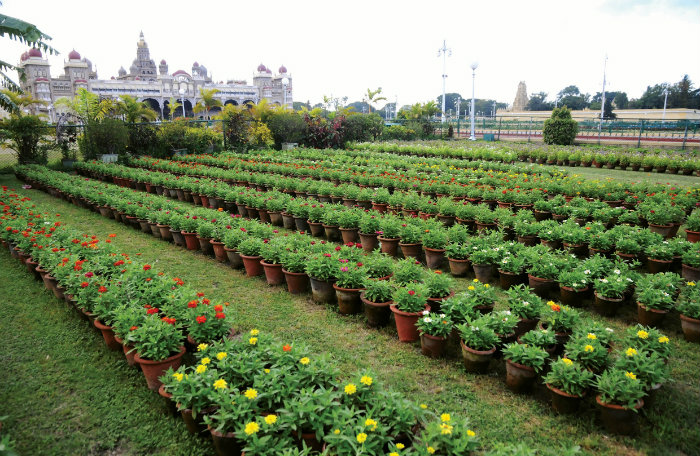 ROYAL BLOOM: Royalty sells and whatever regal is dear to a common man. The magnificent Mysore Palace seems to compete with Kuppanna Park and the Glass House for one-upmanship. The illuminated monument and the blooming flowers will surely soothe the senses of visitors this Dasara.

The Department has selected flower species that continuously flower within a gap of two to three days for the show. Lakhs of these flowers which are being grown in nurseries will be used for the models and the Department is planning to bring over 50,000 varieties from many other places to make this year’s show attractive.

The Department that has shouldered the responsibility of conducting Dasara Flower Show has also come up with special programmes to make this year’s event a memorable one. This year, the Flower Show will be held for 12 days at Kuppanna Park from Oct 10.

The other highlights of Dasara Flower Show will be cartoon flower show for children, dancing statute flower show for adults, patriotic message flower show to seniors, musical fountain, vertical garden, green elephant and a giant model of Lotus Temple inside the Glass House at Kuppanna Park.

Information will be disseminated about keeping dry flowers, importance of miniature gardening, terrace gardening and terrarium gardening. Plans have been made to educate people on devastation in Kodagu in the recent rain havoc by displaying flower replica models. Special flower models will educate people on sound, air and noise pollution. 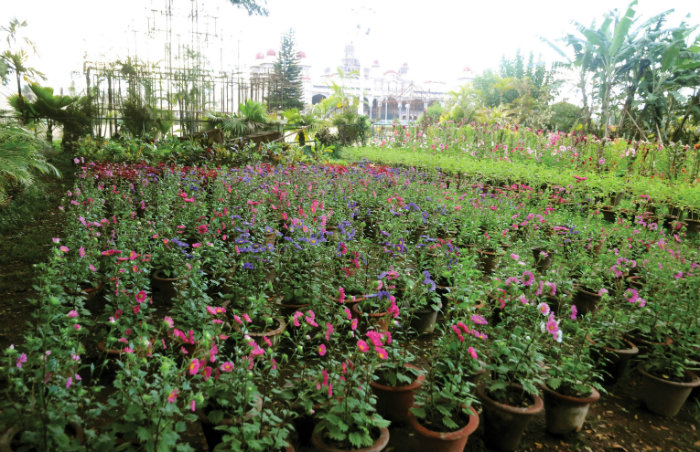 NATURE’S BOUNTY FOR US TO SEE: An onlooker will surely be confused where to look and which flower to admire. Flowers will be competing with each other for attention.

Senior Assistant Director of Horticulture Department Habiba Nishath said Terrariums were discovered in the 19th century when Nathaniel Ward, an English Doctor, found fern sprouting out of a sealed glass bottle that contained cocoons of moths. He then went on to build a closely fitted glazed wooden case, discovering that the ferns he grew within them thrived. These cases went on to become what we today call terrariums, she said. 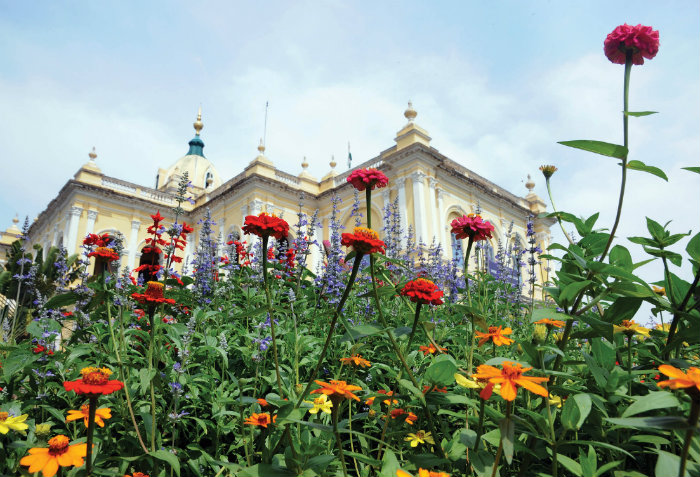 THE SEAT OF POWER: The Deputy Commissioner’s Office, one of the landmark structures from where the District is run, is sporting a colourful look — a combination of heritage structure and fresh flowers.

The Horticulture Department will also exhibit tree house model at Kuppanna Park. The Department has taken this measure to popularise the tree house at a time when some luxury resorts and hotels are fleecing people in the name of tree house tourism. 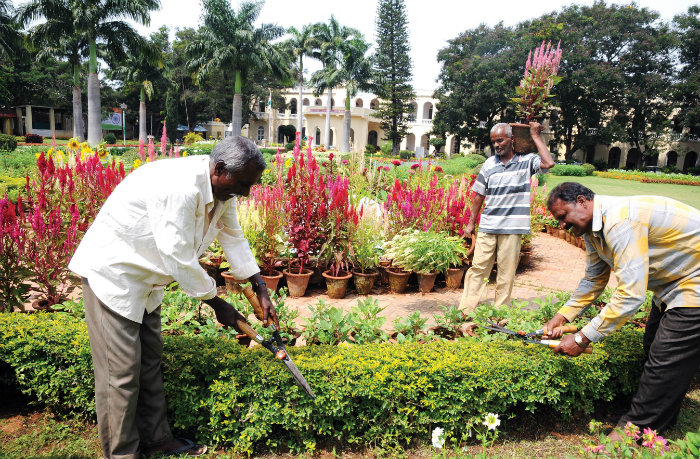 POWER AT GRASSROOTS: Among the government offices in Mysuru, the Zilla Panchayat Office is spacious and has a vast garden area. This year’s Dasara, colourful flowers are bound to attract bees and visitors alike.

Glass House to be the main attraction

Officials of Horticulture Department are all set to showcase the newly-built Glass House at Kuppanna Park as a new attraction during Flower Show and also plans to attract tourists there even after Dasara.

The Department had plans of showcasing Glass House last year itself but this idea did not materialise due its in completion. Former Chief Minister Siddharamaiah had sanctioned the Glass House project to Mysuru in 2015-16 budget after allocating Rs. 6 crore. The project was initiated after several months of delay due to technical reasons. YES, THIS IS IN MYSURU: This is not a structure on a foreign land but our own Mysuru and it is the Glass House with an eye-catching dome at Kuppanna Park. This will be Dasara Flower Show’s show-stopper with a floral model of the famed Lotus Temple.

The total built up area of the Glass House is around 12,000 square metres with a circular outline. Solid toughened glass has been used for the entire structure with the support of steel girders. Flooring has been kept naturally to raise plants. Several exhaust fans and ceiling fans have been installed to control temperature. The Glass House is bigger, wider with dome shaped ceiling which matches the heritage designs of Mysuru.

The Musical Fountain inside the Kuppanna Park will be another major attraction. The fountain dances to eight songs, including Kannada during the 20-minute show.

Speaking to Star of Mysore, Senior Assistant Director of Department of Horticulture Habiba Nishath, who is also Member Secretary for Dasara Flower Show Committee, said this year, the show will be held of 12 days starting Oct. 10 instead of 10 days at Kuppanna Park. This will even be extended in case there is a heavy footfall of visitors. She said that as many as five to six lakh footfalls were registered last year and the number of visitors is expected to increase this year. Habiba Nishath said the tenders to set up food courts and amusement activities for children visiting the Flower Show venue have been approved and this time, children can spend time at the amusement park while adults can enjoy the flower show. Also, a variety of food items will be sold at the food court.

Habiba said that the Lotus Temple, which is one of popular attractions in New Delhi will be the main theme of this Dasara Flower Show and the floral model will be set up inside the Glass House.

The Lotus Temple in New Delhi is a Bahá’í House of Worship that was dedicated in December 1986. It is notable for its flower-like shape. A replica of temple will be featured with a variety of flowers at the Glass House.

Floral replicas of Asoka Pillar and Amar Jawan Jyothi, a memorial constructed after the Indo-Pak War of 1971 in New Delhi to commemorate the martyred and unknown soldiers of Indian Armed Forces who died during this war, will also be displayed. 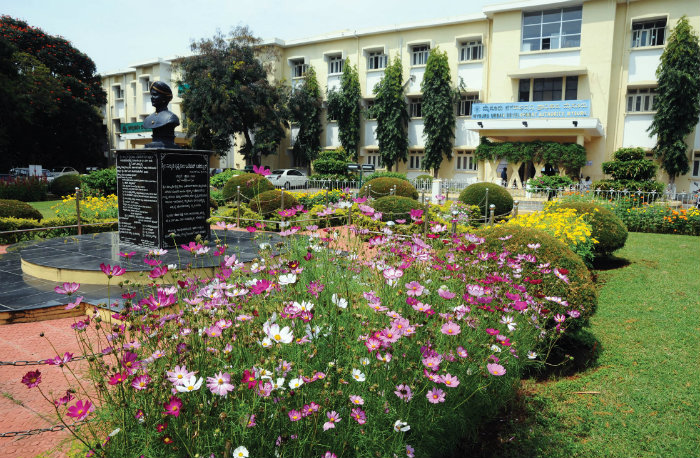 REAL ESTATE VS GARDENING: Do not think that the Office of Mysuru Urban Development Authority is busy only distributing sites and houses. It is also gearing up for Dasara by planting flowering saplings in front of its office.

Statue of Krishnaraja Wadiyar in Millets

The Department had also planned to prepare a flower and millet model statue of Nalwadi Krishnaraja Wadiyar, Sir M. Visvesvaraya and Goddess Cauvery, The intention is to attract farmers of Cauvery delta and to commemorate the contributions of Wadiyars and Sir M.V. who had promoted irrigation, agriculture and horticulture in old Mysore districts.