Home » Feature Articles » CHRISTMASS QUEST: In search of real Christmas beneath the glitz 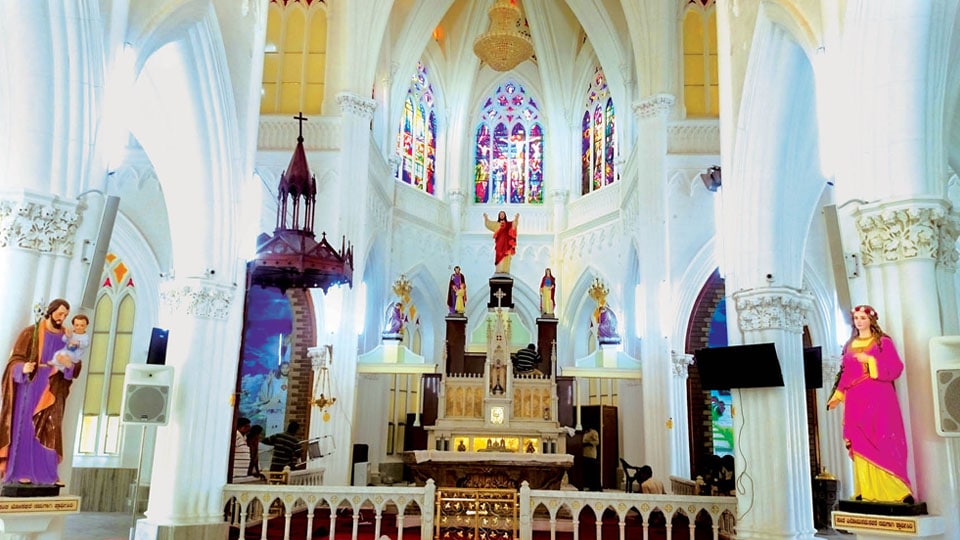 CHRISTMASS QUEST: In search of real Christmas beneath the glitz

Come Christmas or any festival for that matter, celebrating them one wonders, have we really lost the purpose or the true meaning of celebrations under marketing blitzkrieg where commercialisation is slowly taking over spiritualism.  This Weekend Star Supplement conveys a moral message and tells the reader that spirituality, not worldly pleasures, is important for one to celebrate a festival with religious fervour.

It is mid December and Christmas is round the corner. It is the season of winter, cosy weather and that much-awaited moment to wind up the year on a high note. Christmas is not just a season of celebration and festivity. It is a season of love and happiness – where happiness is sought by spreading love, joy and smile on others’ faces. It is the celebration of the birth of Jesus Christ, a humble soul that enlightened the masses.

Mysuru is known for its Christmas celebrations with pomp and gaiety with several churches and religions uniting as one to celebrate this December festivities. But Mysuru has seen a slow and gradual paradigm shift in the type of celebrations over the years – shift from spiritual to cultural and lastly to the sudden growth of commercial. Along with reports of Christmas celebrations at different churches in the city, we focus on the shift that the celebrations have seen over the years. And of course, despite the changes and shift in the celebrations, Mysuru’s Christmas, with its vibrant colours and tongue-tickling tastes, is an occasion to remember.

While celebration of Christmas is seen in the same pattern at all the churches, there are some distinct aspects under which they can be categorised:

Spiritual or religious practice includes a midnight mass usually around the 12 am mark. Sermons are conducted where readings from the Holy Bible are recited. The Gospels of Matthew and Luke are sung and the main message is – “Glory to God in highest and Peace to men of Goodwill”.

The installation of a crib in the form of a stable symbolises the humble tradition of the birth of Christ. This is also known as the ‘Manger Scene’ where art objects and models represent the birth of Jesus. The exhibits represent the infant Jesus, his mother Mary and her husband Joseph. 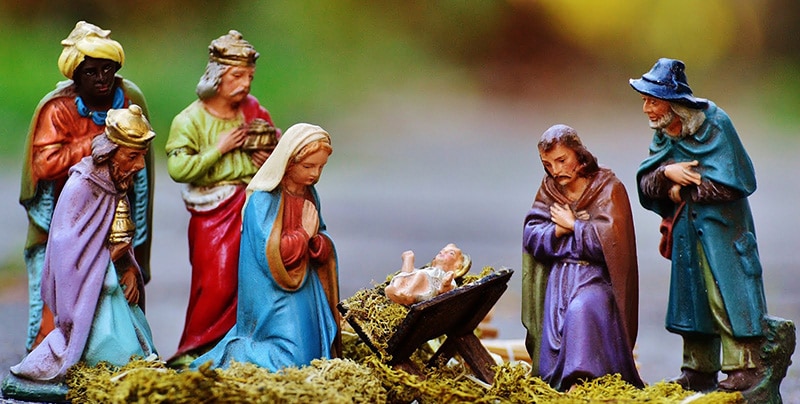 Other characters such as shepherds, sheep, angels, the Magi and their camels are also accommodated in the setup of the crib. Saint Francis of Assisi is credited with the creation of the first crib in 1223 AD in order to cultivate the worship of Christ. The statue of baby Jesus is placed in the crib at the stroke of midnight during every Christmas to recreate the image of the birth of Jesus and relive the whole scenario.

One common feature that can be seen even in almost every individual’s house during Christmas is a bright lit well decorated ‘Star’. The gospels in the Bible reveal that when Jesus appeared, a special bright star appeared in heaven. The Magi then go in search of that star.

In the Gospel of Matthew, the Magi venturing in their search of that star arrive at the court of King Herod in Jerusalem and inform the king of a star which signifies the birth of the King of the Jews. This star is also known as the Star of Bethlehem or Christmas Star which leads the Magi to Jesus’ hometown, where they worship him and shower him with gifts.

Carols – The hymns sung during Christmas are called carols, which revolve around the birth of Jesus Christ.  Famous carols like ‘O Come, All Ye Faithful’ and ‘Silent Night- Holy Night’ are sung since ages to mark the celebrations of the birth of Christ. Songs are sung praising the glorifying birth of the Christ in a simple and a small manger.

The Western breeze has caught up its speed especially in India over the years and the cultural storm is taking the country on a nerve-wracking spin. Santa Claus has become an integral part of Christmas even in India, which wasn’t the case a couple of decades back.

Santa Claus is a legendary figure in the Western Christian culture, who brings in gifts to the homes of good people. He is regarded as a portly, merry and a white-bearded man who in his red coat attire, boots and white cuffs carries gifts to children on his chariot drawn by reindeers. This has become a widespread cultural influence which is being reinforced through songs, television, children’s books, films and media.

One cannot imagine a Christmas without Santa Claus. Children keenly anticipate his arrival to receive gifts.  In the European countries, the concept of Santa Claus is that while the children go to bed after decorating the X-Mas tree in the night, Santa Claus comes late in the night and places the gifts so that when children wake up in the morning they find gifts and goodies addressed to them around the tree.

Christmas and cake go hand-in-hand. The Western celebration of cutting cakes to mark the birth of an individual is a common sight throughout the world now. Distribution of cakes, especially the Plum Cakes during Christmas is something that has been ferried to India by waves from the West.

Adding on to the cake, Indian Christians prepare several traditional delicacies. The Konkanis call it the ‘Kushwar’ where various sweet (cookies, ladoos) and snacks are prepared and distributed among neighbours and family.

Now the Christmas tree that has traditionally been used to celebrate winter festivals by Christians and Pagans. The Pagans use it to decorate their homes, while Christians decorate the fir or the pine tree during Xmas celebrations. 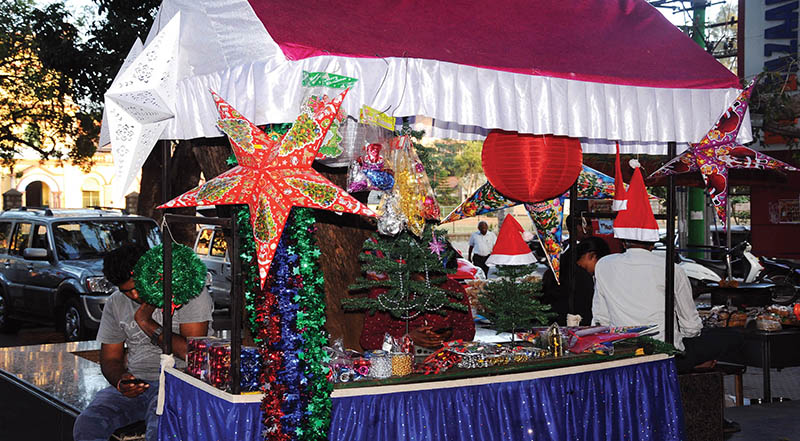 The concept revolves around the fact that in European countries, especially during winters, when there is heavy snowfall, the Pine trees are the only ones that sport green leaves (spines). Thus they were used as a part of the celebrations.

In the olden Christmas times, it is believed that the tree was hung upside down from the ceiling using chains or ropes. Some people also use Cherry or Hawthorn plants or use a part of the plant and place it in a pot and decorate the small pot around the chimneys in their homes. This cultural influence of decorating the pines is a common sight even in India and parts of Asia.

The Christmas which we craved for in our childhood is completely different to the one that we are witnessing in the modern day. Those were the times when it was all about family and goodwill rather than hunting for offers in stores and markets.

The ‘old-fashioned’ Christmas was all about spreading love. But due to a gradual shift of marketing and commercialisation, it has become a cause of concern where one wonders who is profiting? The manufacturer, the seller or the buyer? Even if it is a profit, then at what cost?

A peaceful walk through to the malls or through the commercial hubs of Mysuru during Christmas is a difficult proposition as almost all shops putting up festive offers to attract eyeballs and at the same time do business. A host of attractions including a pine tree filled with cotton flakes acting as snow can be seen at malls during this time. This is their way of pulling the crowd to sell their merchandise. 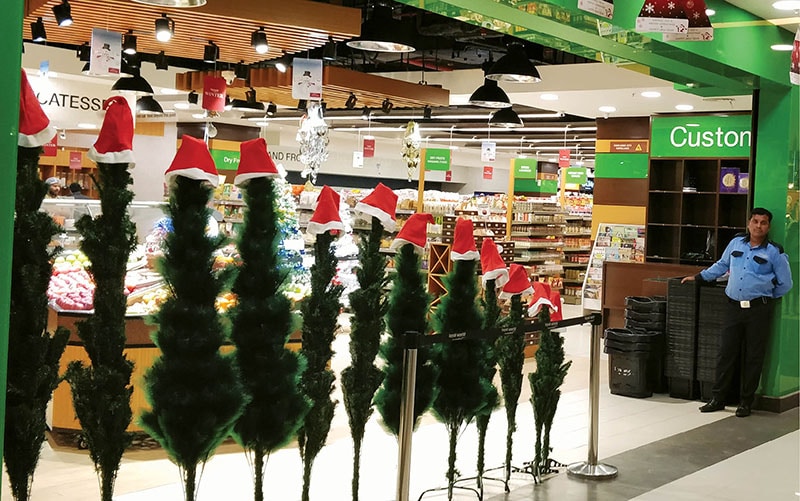 The real Christmas, as the Popes have been saying year after year, lies in spreading happiness without caving into worldly pleasures and the realisation of the fact that we first belong to Jesus and then to ourselves. The tectonic shift from spirituality towards commercialisation is visible whenever it is festival time and of late, the gap between spirituality and commercialisation is widening with the latter stealing the limelight.

Shoppers and brands put up Christmas festive offers and draw attraction by lighting up their stores and showrooms, inviting public to fall into the abyss of commercialisation in a never-ending search of more comforts and luxuries. Blame it on industrial revolution or modernisation, but the shift is not a healthy one not at least for India where spiritual and cultural values are held in high esteem.

The real war on Christmas is our corporate-driven materialistic and pleasure-seeking culture. And this war, waged by corporate profiteers through a crunching multimedia campaign, is a conflict to the real Christmas spirit.

This commercialised Christmas mocks at charity and financial modesty, paving way for market opportunities that can be exploited. It is not just Christmas that is being commercialised. Every single major festival in India is under the corporate grind.

Corporate Christmas is a surprise box that is filled with void pleasures and desires that uses religious traditions as a mere ‘product’ that is expected to beat all sales record and spike the company’s profit graph. This is not the reason for which the festivity season is known for at all. Commercialisation is downplaying religious sentiments and people are turning customer-centric – the fact that we have to live with.

It is true that vendors use this festive season as a platform to ramp up business, but people should not completely forget the real essence of Christmas which is the spiritual form which also involves spreading of love and joy — a Time for Giving. People should stem their desires and pleasures and must concentrate on committing themselves in the service of God and to the needy.

Before the commercial practices engulf us and the true festive reasons fade away, catch that guiding stream of light just like the Magi and go in search of the real Christmas.

This Christmas, ensure you and your family visit the church, look at the Nativity scene or the Crib to relive the moment of Christ’s birth, cook old family recipes, spread love and happiness and find peace within yourselves by embracing simplicity.

Ensure to find your joy in others’ happiness. One must remember to keep the ‘Christ’ in Christmas and that is when the true celebration can be felt within oneself, upholding the real spirit of Christmas.